The Encyclopædia Britannica notes that McLachlan was "called by some the Burns of Canada for his Scots dialect poetry, much of which deals with the homesickness of Scots immigrants."[2]

McLachlan was born in 1817 in Johnstone in Strathclyde, Scotland, the son of Jean (Sutherland) and Charles McLachlan.[1]

In 1820, their father emigrated to Upper Canada (now Ontario), leaving his family with his father-in-law, Alexander Sutherland. McLachlan later described his grandfather as an influence on his life, calling him an "old patriarch" who was "simply yet grandly sincere." Another influence on the young Alexander McLachlan was his schoolmaster, John Fraser, who instilled in him a love of learning.[1]

McLachlan went to work in a cotton mill at 13, but he found the work "irksome," so he found work as a tailor's apprentice in Glasgow. In that city he associated in radical political circles, and also "with other young men who shared his interest in Scottish history and traditions, and who were writing poetry in the style of Robert Burns."[1]

Learning that his father had died, McLachlan emigrated to Upper Canada in 1840, and was granted his father's 100 acres in Caledon Township. He married his cousin Clamina, and arranged for his sisters Jean and Elizabeth to immigrate.[1]

In 1846 appeared McLachlan earliest published poetry, a 36-page chapbook titled The Spirit of Love, and other poems, printed in Toronto.[1]

By 1848 McLachlan had sold his land and moved. "When the census for the district of Huron was taken in 1848, Alexander, a 'tailor,' Clamina, and the two children were living in a rented house in North Easthope Township; the family had 'no creed or denomination.'"[1]

In 1850 the McLachlans moved to Erin, near Guelph, where McLauchlan worked as a tailor and raised a family of 11 children.[3] During that time, he "worked at both his tailoring and his poetry." He published poetry in the Anglo-American Magazine begining with "The Early Blue-bird" in July 1854. He published a second book, Poems, in 1856. On or around 1857,[1] his "elegaic song 'The halls of Holyrood' won The British Workman's prize for the best poem about Queen Mary's palace."[3]

For his 1858 book, Lyrics, McLachlan found a new way to promote his work. He distributed advance copies to press and others, and printed their favorable comments at the back of the book. Lyrics carries a glowing tribute from Charles Sangster to McLachlan's "essentially lyrical" Muse. McLachlan's 1861 book, The Emigrant, and other poems, carried tributes from Thomas D'Arcy McGee and Susanna Moodie. McGee and McLachlan soon became friends.[1]

McLachlan, "achieving a reputation as a speaker, ... also gave lectures for the Mechanics' Institute."[3] From 1859 through 1861 he lectured "in most of the principal towns of Canada, and in the state of New York, "and by the 1860s he was beginning to achieve recognition."[1]

Through his friendship with D'Arcy McGee, McLachlan was made Canadian immigration agent in Scotland in 1862.[3]

After his return to Canada, "McLachlan contributed several poems to the weekly Scottish American (New York), and he appeared in several Canadian periodicals, including the Canadian Literary Journal (Toronto), the Canadian Monthly and National Review (Toronto), the New Dominion Monthly (Montreal), and Stewart's Literary Quarterly Magazine (Saint John, N.B.)." Archibald McMurchy, who knew him at the time, described him as "a man of average height, spare build, blue eyes, and abundant dark hair."[1]

1874 saw the publication of McLachlan's "highly praised" Poems and Songs.[1] The book contains the often anthologized, "We live in a rickety house".

Through his final 2 decades "McLachlan regularly had poetry published in the Scottish American and also contributed to the Canadian Monthly, Saturday Night, the Week, and Grip.... From May 1886 until December 1888, McLachlan contributed over 50 poems to Grip."[1]

The Oxford Companion to Canadian Literature calls McLachlan "the poet of the backwoods pioneers; in his time he was known as 'the Burns of Canada' for his celebration of the democratic spirit of brotherhood and the toil of the common man.... Like Burns, he complements his reverence for the common man with kindly humour, satirizing skinflints and mistreaters of oxen. Occasionally, as in 'We live in a rickety house', he rises to the ironic pitch of a Blakean nursery song in condemning the naivety of pious charity workers who fail to recognize the church's responsibility for the ignorance and crime that exist among the poor."[3]

The Dictionary of Literary Biography (DLB) characterizes his first work, The Spirit of Love, as "presenting his poetic meditations on liberty, labor, nature, and science. Poems (1856) celebrates Scottish memories; Lyrics (1858) adds Canadian rhymes on contemporary politics, and strikes more tender notes: love for birds and animals, for eccentric neighbors, and for Clamina and the bairns."[4]

The Dictionary of Canadian Biography calls McLachlan's unfinished long poem "The Emigrant," "the most important" of his works.[1] That may be a common judgement; an introduction to a 20th-century printing of the poem begins by declaring: "Alexander McLachlan's The Emigrant is more often mentioned as important or significant than discussed in detail or at length."[5] The DLB says that the poem "moves from the first trials of pioneering – homesickness, sabbath in lonely woods, fire in a solitary clearing – to first comforts: family love, faithful animals, and the companionship of books.... "The Emigrant" is general history, ... forceful and dignified."[4]

Noting that much of McLachlan's poetry "deals with the homesickness of Scots immigrants," the Britannica calls him "foremost among a number of such Scottish bards, whose themes of nostalgia for Scotland appear to be literary conventions rather than original expressions."[2]

In 1862 Henry James Morgan included McLachlan in his Sketches of Celebrated Canadians, stating that he was "to be to Canada ... what Burns was to Scotland." Edward Hartley Dewart, who included McLachlan's poetry in his pioneering 1864 anthlogy, Selections from Canadian Poets, also referred to him as "the Burns of Canada." McLachlan's works have frequently been anthologized since.[1]

The Dictionary of Canadian Biography reports that: "On 28 April 1890 'a grand banquet' was held at the Walker House hotel in Toronto. A purse of $2,100 was given to McLachlan and an address testifying to the esteem in which he was held 'as a poet, a true man, and a faithful friend' was read."[1] 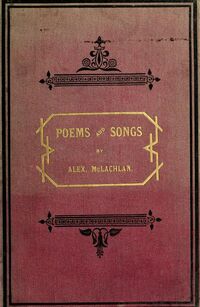 Retrieved from "https://pennyspoetry.fandom.com/wiki/Alexander_McLachlan?oldid=221769"
Community content is available under CC-BY-SA unless otherwise noted.