Alice Cary was born in Mount Healthy, Ohio near Cincinnati.[1] Her parents lived on a farm bought by Robert Cary in 1813 in what is now North College Hill, Ohio. He called the 27-acre (110,000 m2) property Clovernook Farm. The farm was 10 miles 10 miles (16 km) north of Cincinnati, a good distance from schools, and the father could not afford to give their large family of 9 children a very good education. But Alice and her sister Phoebe were fond of reading and studied all they could.

While the sisters were raised in a Universalist household and held political and religious views that were liberal and reformist, they often attended Methodist, Presbyterian, and Congregationalist services and were friendly with ministers of all these denominations and others. According to Phoebe,

Though singularly liberal and unsectarian in her views, [Alice] always preserved a strong attachment to the church of her parents, and, in the main, accepted its doctrines. Caring little for creeds or minor points, she most firmly believed in human brotherhood as taught by Jesus; and in a God whose loving kindness is so deep and so unchangeable that there can never come a time even the vilest sinner, in all the ages of eternity, when if he arises and go to Him, his Father will not see him afar off, and have compassion upon him.[2]

When Alice was 17 and Phoebe 13, they began to write verse, some of which was printed in newspapers. Their mother had died in 1835, and two years afterward their father married again. The stepmother was wholly unsympathetic regarding the literary aspirations of Alice and Phoebe. For their part, while the sisters were ready and while willing to aid to the full extent of their strength in household labor, they persisted in a determination to study and write when the day's work was done. Sometimes they were refused the use of candles to the extent of their wishes, and the device of a saucer of lard with a bit of rag for a wick was their only light after the rest of the family had retired.[3]

Alice's first major poem, "The Child of Sorrow," was published in 1838 and was praised by influential critics including Edgar Allan Poe, Rufus Wilmot Griswold, and Horace Greeley.[4] Alice and her sister were included in the influential anthology The Female Poets of America prepared by Rufus Griswold.[5] Griswold encouraged publishers to put forth a collection of the sisters' poetry, even asking John Greenleaf Whittier to provide a preface. Whittier refused, believing their poetry did not need his endorsement, and also noting a general dislike for prefaces as a method to "pass off by aid of a known name, what otherwise would not pass current".[6] In 1849, a Philadelphia publisher accepted the book, Poems of Alice and Phoebe Cary, and Griswold wrote the preface, left unsigned. By the spring of 1850, Alice and Griswold were often corresponding through letters which were often flirtatious. This correspondence ended by the summer of that year.[7]

Cary wrote for the Atlantic Monthly, Harper's, Putnam's Magazine, the New York Ledger, the Independent, and other literary periodicals. Her articles, whether prose or poetry, were gathered subsequently into volumes which were received well in the United States and abroad. She also wrote novels and poems which did not make their first appearance in periodicals.[3] Among her prose works were The Clovernook Children and Snow Berries, a Book for Young Folks.

Caru died of tuberculosis in 1871[8] in New York at age 51. The pallbearers at her funeral included P.T. Barnum and Horace Greeley. She is buried in the Green-Wood Cemetery, Brooklyn, New York City.

Cary Cottage, the Cary sisters' childhood home, stands today on the east side of Hamilton Avenue (US 127), on the campus of the Clovernook Center for the Blind and Visually Impaired in North College Hill. Cary Cottage became the 1st home in Ohio for blind women. It was placed on the National Register of Historic Places in 1973. 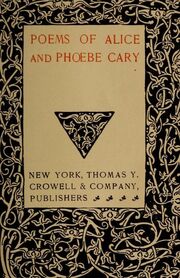 Retrieved from "https://pennyspoetry.fandom.com/wiki/Alice_Cary?oldid=199050"
Community content is available under CC-BY-SA unless otherwise noted.