Bayldon was born in Leeds, England, the son of Matilda Maria (Dawson) and Charles Henry Bayldon. He attended Leeds Grammar School, where he learned an appreciation of poetry from the Wordsworth scholar J.R. Tutin. Tutin later published his first two books of verse in England.[1]

Bayldon emigrated to Australia in 1889, settling in Brisbane and working as a freelance journalist.[1] He lost all his possessions in the Brisbane flood of 1893.[2] Between 1890 and 1930 he worked at a variety of jobs, including swagman, rouseabout, phrenologist, full-time motto-writer, lighter-owner, salesman of his own books, insurance agent, picture dealer, clothier's agent, teacher of English composition, literary lecturer, editor of and canvasser for a comic monthly, tea-merchant, private secretary, and advertisement-writer. He also toured Queensland and New South Wales, supporting himself by giving lectures, swimming lessons, and poetry recitals.[1]

In the 1890s Baydon began publishing poetry and literary criticism in The Bulletin. He sought to expand the Bulletin's focus beyond purely national literature, writing on Byron, Tennyson, Longfellow and Browning as well as Australian writers. He published a volume of Poems in Brisbane in 1897.[1]

In 1900 Bayldon moved to Orange, New South Wales, where he married Maude Bernard Leighton on 16 June 1902; sometime during or after World War I he relocated to Sydney. As well as publishing 4 more books of poetry through 1944, he began writing and publishing short stories, which were collected in book form in 1910. He also wrote an unpublished novel.[1]

He died indigent, at the Little Sisters of the Poor in Sydney.[1]

Three of Bayldon's poems were anthologized in An Anthology of Australian Verse in 1906,[3] and four in A Book of Queensland Verse in 1924. He continued to be represented in anthologies of Australian poetry as late as 1956.[2]

In the 1930s he was granted a Commonwealth literary pension of 52 pounds a year.[1] 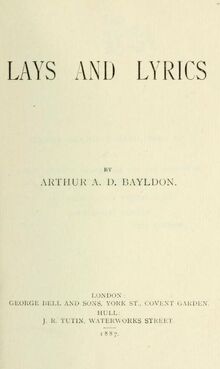 Retrieved from "https://pennyspoetry.fandom.com/wiki/Arthur_Bayldon?oldid=116305"
Community content is available under CC-BY-SA unless otherwise noted.