Barcroft Henry Thomas Boake (March 26, 1866 – May 1892) was an Australian poet.[1] Boake worked as a surveyor and a boundary rider, but is best remembered for his poetry, a volume of which was published five years after his death.

In July 1886 Boake joined E. Commins, a surveying|surveyor, and had experience as a field-assistant, working for some time in the Monaro (New South Wales). After spending two years in the surveying camp Boake was disinclined to return to the city, took service as a boundary rider, and worked in New South Wales and Queensland. In May 1890 Boake joined W. A. Lipscomb, a surveyor, and remained with him until the end of 1891. About this time he began to send verses to The Bulletin, which were published.

Boake is believed to have committed suicide. His body was found hanging by the neck from a stockwhip at Middle Harbour in Sydney eight days after he disappeared on 2 May 1892. One writer on Boake's life has mentioned that the suicide took place during the 1891-93 depression when the poet was unable to find work, also noting that "it has been suggested that he killed himself for the love of one of the McKeahnie girls," sisters of the horseman Charlie McKeahnie.[2] 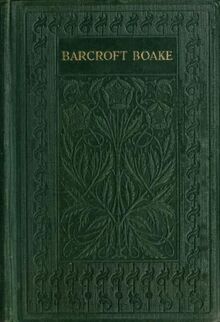 Except where noted, bibliographical information courtesy the Australian Poetry Library.[1]

Retrieved from "https://pennyspoetry.fandom.com/wiki/Barcroft_Boake?oldid=94675"
Community content is available under CC-BY-SA unless otherwise noted.