Procter, born at Leeds, and educated at Harrow, went to London and practised successfully as a solicitor. Thereafter he became a barrister, and was (1832-1861) a Commissioner of Lunacy. By 1823 he had produced 4 volumes of poetry and a tragedy, Mirandola (1821). His works include Dramatic Scenes (1819), A Sicilian Story, Marcian Colonna (1820), The Flood of Thessaly (1823), and English Songs (1832), which last will perhaps survive his other writings. Procter was the friend of most of his literary contemporaries, and was universally beloved.[1]

Procter's ancestors had been small farmers in the north of England;[2] his father came to London and entered into business. "By some bequest or accident of luck," says his son, he achieved an independence. His parsimony was as conspicuous as his integrity. He died in 1816. Of Procter's mother, who survived until 1837, he merely says "she was simply the kindest and tenderest mother in the world."[3]

Procter was born at Leeds on 21 November 1787. As a boy, Procter was distinguished by a passion for reading, which was encouraged by a female servant, who initiated him into Shakespeare. He does not, however, seem to have distinguished himself at Harrow, where, after some years' preliminary schooling at Finchley, he went at the age of 13, and where he was the schoolfellow of Peel and Byron.[3]

Upon leaving school he was articled to Mr. Atherton, a solicitor at Calne in Wiltshire, of whom he speaks with great respect. He returned to London in 1807, at which point the fragment of autobiography he has left us ends.[3]

In 1815 he began to contribute to the Literary Gazette. He soon entered into partnership with another solicitor, and long practised his profession. But literature occupied most of his attention.[3]

He began to write under the pseudonym of "Barry Cornwall," an imperfect anagram of Procter's real name.[3]

He seems to have for a time launched out upon a jovial, though not a dissipated, course of life, taking a house in Brunswick Square, keeping a hunter, and becoming a pupil of Thomas Cribb. This free mingling with the world, natural in 1 whose opportunities appear to have been previously restricted by parental economy, occasioned after a while some temporary financial embarrassment, but it was the means of introducing him to the circle of Leigh Hunt and Charles Lamb, the influence of both of whom may be traced in the abundant poetical productiveness of the next few years. Hunt inspired Marcian Colonna (1820), A Sicilian Story (1821), and The Flood in Thessaly (1823). Lamb prompted the Dramatic Scenes (1819).[3]

The tragedy of Mirandola was brought upon the stage, at Covent Garden Theatre, somewhat prematurely (January 1821), with the view of relieving the author from the embarrassments in which his hospitality and difficulties with a business partner, together with the loss of an anticipated legacy, had involved him. The object was attained, Procter receiving 630l. as his share of the proceeds of a 16 nights' run; but the play, a fair and even a favorable example of the taste of the time, was never revived. It owed much of its success to the acting of Charles Kemble, who was said to have never before been so perfectly provided with a part as by Procter's Guido.[3]

The success of his tragedy, and the establishment of the London Magazine in 1820, introduced Procter to a wider literary circle; and, as he liked almost everybody and everybody liked him, he gradually became acquainted with most contemporary authors of distinction. He performed 2 eminent services to literature — by initiating Hazlitt, who previously had been acquainted only with Shakespeare, into the Elizabethan and Jacobean drama in general; and by guaranteeing, in conjunction with Thomas Lovell Beddoes and T. Kelsall the expense of the publication of Shelley's posthumous poems.[4]

Although, however, his literary interests and sympathies expanded, his literary productiveness, except as a writer of stories for annuals, almost entirely ceased. The cause was probably the necessity for assiduous devotion to legal pursuits after his marriage, in 1824, with Miss Skepper (born 11 September 1799), step-daughter of Basil Montagu, a lady of great gifts, both social and intellectual. By her he had 3 daughters, the eldest of whom was poet Adelaide Anne Procter, and 3 sons, 1 of whom became an officer and served in India; the others died young.[4]

The branch of law to which Procter now addicted himself was conveyancing, in which he obtained a large practice. He had also numerous pupils, among whom were Kinglake and Eliot Warburton.[4]

His last important contribution to poetry was the volume of songs published in 1832, with an appendix of brief dramatic fragments, and a preface announcing his farewell to poetry; save for such isolated exceptions as his fine epistle to Browning, he abstained from verse for the remainder of his life. In 1832 he undertook a life of Edmund Kean, a task which Leigh Hunt had wisely declined. It was published in 1835, but Procter earned nothing from it beyond his stipulated honorarium and a scathing critique in the Quarterly.[4]

He had already been called to the bar, and in 1832 was made a metropolitan commissioner in lunacy, which seems to have been thought an eminently suitable appointment for a poet. He held it until 1861, when he retired upon a pension calculated on no generous scale. But the blow was broken by the handsome legacy he had received a few years previously from John Kenyon.[4]

Procter's disposition is 1 of the most amiable recorded in the history of literature, Carlyle called him "a decidedly rather pretty little fellow, bodily and spiritually." He appears entirely exempt from the ordinary defects of the literary character, and a model of kindly sympathy and generous appreciation.[4]

His secret good deeds were innumerable. His chief intellectual endowment was an instinctive perception of novel merit, which embraced the most various styles of literary excellence, and which, combined with his frankness of eulogy and his wide social opportunities, enabled him to be of great service to young genius. Browning and Swinburne were both deeply indebted to him in this respect.[4]

His prose writings were published in America in 1853, and no occurrence of importance marked the remainder of his life except the death of his daughter Adelaide in 1864, and the publication in London of his delightful biography of Charles Lamb in 1866. Procter died on 5 October 1874. His wife survived until March 1888. She was long the center of a highly cultivated circle, which delighted in her shrewdness and wit. "Her spirits," says a writer in the Academy, "often had had to do for both."[4]

His own claims as a poet cannot be rated high. His narrative poems occasionally display beauty both of diction and versification, but are on the whole languid compositions, whose chief interest is that they alone among the poems of the day evince the influence of Percy Bysshe Shelley, who is imitated judiciously and without exaggeration or servility.[4]

Some of the longer dramatic scenes have extraordinary lapses into bathos, but the brief fragments are often fanciful and poetical.[4]

Lamb said that to none of the Dramatic Scenes would he have refused a place in his selection from the Elizabethan dramatists, had they come down to us from that period. This judgment is a remarkable instance of the intrepidity of friendship; for Procter's scenes, though graceful and poetical, are very obvious productions of the 19th century, and seldom transcend the forcible feeble in their attempts to exhibit vehement passion. They are nevertheless much more successful than Procter's imitations of Byron's serio-comic style in some of his poems of this date, to which Byron alludes with good-natured disdain.[3]

But none of those efforts exhibit the genuine individuality of the man, which is to be found exclusively in his songs. These were mostly written about this time, although not published until 1832, and, if not effluences of potent inspiration, are melodious, vigorous, and rarely imitative. Longfellow thought them "more suggestive of music than any modern songs," a judgment in which it is difficult to concur.[3]

Procter's songs will probably constitute the most abiding portion of his work. A few, such as "To a Flower," are exceedingly beautiful, and others have obtained wide popularity through their simple energy and the musical accompaniments by Chevalier Neukomm, who, according to Chorley, monopolised the proceeds.[4]

His prose writings are always agreeable. The most valuable are the essay on Shakespeare, whom he idolised, contributed to an edition of the poet's works in 1843, and the biography of Charles Lamb, simple and unpretending, but irradiated by the light of personal acquaintance and the glow of sympathy.[4]

His critical papers and his tales, contributed to annuals, were mostly comprised in the American edition of his prose miscellanies, but have not been reprinted in England.[4]

Barry Cornwall was a very fluent and accomplished artist in verse rather than what we usually understand by a poet. He had nothing bardic or prophetic in his nature, he was burdened with no special message to mankind, and he gave no sign of ever feeling very strongly on any particular point or occasion. The critic is curiously baffled in seeking for a poetical or personal individuality in his verse, for he never seems to be expressing anything in his own person. This negative quality forms the chief characteristic of his best work, his English Songs.

All other known lyrists have either recorded in their songs their personal experiences in emotion, or they have so framed their verses as to seem to do so; Barry Cornwall alone has contrived to write songs of a purely and obviously impersonal and artificial kind, dealing dramatically with feelings which the poet does not himself pretend to experience. His fragments of drama are lyrical, his lyrics dramatic, and each class suffers somewhat from this intrusion into the domain of the other. We hardly do justice to the merit of verse which is so impartial as to become almost uninteresting, and Procter has suffered from his retiring modesty no less than other poets from their arrogance. His lyrics do not possess passion or real pathos or any very deep magic of melody, but he has written more songs that deserve the comparative praise of good than any other modern writer except Shelley and Tennyson. There is a sort of literary insincerity about Barry Cornwall’s verse that found no counterpart in the beautiful character of Mr. Procter. We wonder at rapturous addresses to the ocean,

from the landsman who could never, in the course of a long life, venture on the voyage from Dover to Calais, and at bursts of vinous enthusiasm from the most temperate of valetudinarians; but the poet would have defended his practice by his own curious theory that "those songs are most natural which do not proceed from the author in person."

Procter’s verse has been much admired and much neglected, and will never, in all probability, gain the ear of the public again to any great extent. His merits are more than considerable, but the mild lustrous beauty of his verse is scarcely vivid enough to attract much attention. There would be more to say about his writings if they were less faultless and refined.[5]

Cornwall inspired Alexander Pushkin to some translations and imitations in 1830. Just hours before his last duel in 1837, Pushkin sent a collection by Cornwall to a fellow author, Mrs. Ishimova, suggesting that she should translate some poems selected by him. 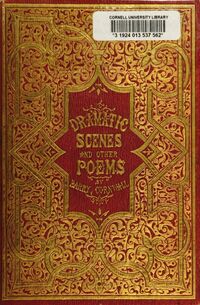 This article incorporates text from a publication now in the public domain, the Dictionary of National Biography (edited by Leslie Stephen). London: Smith, Elder, 1885-1900. Original article is at: Procter, Bryan Waller

Retrieved from "https://pennyspoetry.fandom.com/wiki/Barry_Cornwall?oldid=238235"
Community content is available under CC-BY-SA unless otherwise noted.