Sangster's 1856 volume, The St. Lawrence and the Saguenay, "was received with unanimous acclaim as the best and most important book of poetry produced in Canada until that time."[1] He was "the first poet who made appreciative use of Canadian subjects in his poetical work."[2] The Dictionary of Canadian Biography calls him "the best of the pre-confederation poets."[1]

Sangster was born at the Navy Yard on Point Frederick (now the site of Royal Military College of Canada), near Kingston, Ontario,[2] the son of Ann Ross and James Sangster. A twin sister died in infancy.[3]

His father, a "joiner" or shipbuilder who worked for the Royal Navy around the Great Lakes, died at Penetanguishene just before Charles turned 2.[4] His mother raised Charles and his 4 siblings on her own.[1]

Sangster was an indifferent student, finding "the school curriculum irrelevant and his masters stern and uninspiring."[4] At 15 years old, he left school to help provide for the family. He took a job in the naval lab making cartridges at Fort Henry, and 2 years later was transferred to the Ordnance office at the fort.[1]

About this time (1839) Sangster wrote his earliest serious poem, a 700-line narrative in rhyming couplets called "The Rebel." The poem "contains an extensive vocabulary and rich and imaginative historical and geographical allusions, ... beyond what might be expected of a boy ... who had so little formal education," says the Dictionary of Canadian Biography; "the content and form suggest considerable previous writing."[1]

During the 12 years that he worked at the Ordinance office, Sangster began doing part-time work for a Kingston newspaper, the British Whig. He also continued writing poetry and submitting it, anonymously or pseudonymously, to the local papers.[3]

In 1849 Sangster quit his job at Fort Henry and moved to Amherstburg, Ontario, where he became editor of the Amherstburg Courier.[2] When James Reeves, owner of the Courier, died the same year, Sangster returned to Kingston, to work as a proofreader and bookkeeper for the British Whig.[1]

Sangster gained national attention as a poet in 1850, when his poetry began appearing in Canada's Literary Garland magazine. Soon he was publishing in other magazines, such as Anglo-American Magazine, as well.[4]

In 1853 Sangster took a steamship excursion down the St. Lawrence River and up the Saguenay River in Quebec, which he wrote about for the Whig in a series of travel letters called "Etchings by the Way" – material he would also use in his long poem, "The St. Lawrence and the Saguenay".[5]

Sangster published his debut collection of poetry, The St Lawrence and the Saguenay, and other poems, in 1856. The book was widely praised by reviewers and readers. Susanna Moodie wrote to Sangster; "If a native of Canada, [one] may well be proud of her Bard, who has sung in such lofty strains the natural beauties of his native land."[1] The National Magazine of London echoed the same sentiment: "Well may the Canadians be proud of such contributions to their infant literature.... In some sort, and according to his degree, Mr. Sangster may be regarded as the Wordsworth of Canada."[6]

Charles Sangster "married 21-year-old Mary Kilborn of Kingston on Sept. 16, 1856, and the newlyweds moved into a brick house at 144 Barrie Street across from the grassy park. (An historical plaque directly across the street honours the Sangster home.)" Mary was to die of pneumonia just 16 months later.[4]

In 1859, Sangster wrote the poem "Brock", commissioned for the inauguration of the monument to General Isaac Brock at Queenston Heights.[5]

Sangster's 2nd book of poetry, Hesperus, and other poems and lyrics, appeared in 1860, published in Kingston and Montreal. "A rousing success, Hesperus ... received even more approval than his first book."[4] "Hesperus was well received, and many critics considered it superior to The St. Lawrence and the Saguenay, as did Sangster himself."[1] The same year, Sangster remarried, to Henrietta Charlotte Mary Meagher, who was only 17 years of age (to his 38).

In 1864, Sangster became a reporter for the Kingston Daily News, and 16 of his poems appeared in the earliest anthology of Canadian poetry, Selections from Canadian Poets. The same year, the Sangsters celebrated the birth of their 1st child, Charlotte Mary.[1]

By 1867, Sangster "was in a poor financial situation and suffered increasingly from ill health, depression, and a nervous disorder that would cause him deep mental pain the rest of his life." To help him out his neighbor, the new Postmaster-General Alexander Campbell, arranged a job for Sangster with Canada's new Post Office Department.

Accordingly, in 1868 at the age of 46, Sangster "accepted a position in the Post-Office Department at Ottawa, where his poetic energy and ambition succumbed, apparently, to the incessant drudgery and to the hampering cares of ill-paid employment.",[2] "With his appointment ... Sangster's life became characterized by overwork, ill health and scant literary output."[7] He remained with the Post Office until his retirement in 1886.[5]

Sangster was also kept busy by a growing family. Charlotte died in 1868, shortly after the move to Ottawa. The same year, though, Mrs. Sangster gave birth to a second daughter, Florence. Two years later, in 1870, their third daughter, Gertrude was born, followed in 1879 by a son, Roderick.[1]

Sangster published 16 poems in magazines between 1868 and 1878, most of which he had written before moving to Ottawa.[1] He wrote virtually nothing for the 18 years he worked at the Post Office. As he later wrote: "When I went down to Ottawa ... I took a pile of M.S. of a third volume with me, as I thought 'ready for the press', but in all the 18 years I remained there I did little more than correct.... When they get a man into the Civil Service, their first duty is to crush him flat, and if he is a fool of a Poet, or dares to think of any nonsense of that kind, draw him through a Knot or a gimlet hole a few times, pile with agony of toil, toil, toil until his nerves are flattened out, all the rebound knocked out of him, and then ... superannuate him ... and tell him he should be thankful."[6]

Sangster had a nervous breakdown in 1875,[1] and developed a chronic nervous system condition during the 1880s.[3] To make matters worse, Henrietta died sometime between 1883 and 1886, leaving him to raise his new family alone. After another breakdown in March 1886, he took a 6-month leave of absence, and also resigned from the Royal Society of Canada (which had elected him in 1882). Finally, that September he retired and moved back to Kingston.[1]

For the earliest years of his retirement, Sangster did little but convalesce. In July 1888, he received a letter from W.D. Lighthall, inquiring about new poems for an upcoming anthology (most likely Lighthall's 1889 Songs of the Great Dominion). Sangster replied the next day, and the 2 men struck up a friendship by mail.[6]

Revitalized, Sangster began revising his poetry. He doubled the size of "The Saint Lawrence and the Saguenay" to over 200 stanzas, and sent the manuscript to his cousin Amos Sangster to illustrate. When Amos died, the manuscript and the new poem was lost. However, 40 of the new stanzas survived thanks to being published in various magazines.[1]

Charles Sangster also cut many of the "other" poems in the earlier volume, and made over 2,000 changes to those he kept. Hesperus got off easier, but Sangster still made more than 200 revisions to the work. As well, Sangster prepared 2 more volumes for publication, mostly from poems he'd written before moving to Ottawa: Norland Echoes, and other strains, and The Angel Guest, and other poems.[8]

By the summer of 1891, all 4 manuscripts were complete, and Sangster sent them off to Lighthall (who had become his literary executor). However, before any of them could be published, Sangster died, and none were published until the 1970s.[6]

Sangster died in Kingston in 1893, and is buried in the city's Cataraqui Cemetery.[4]

The Canadian Encyclopedia says that "Sangster's poetry distinguishes him as a lover and keen observer of the natural world. He displays overwhelming passion in some poems and equally extreme melancholy in others. Whatever his mood he is consistently and intensely serious and deeply religious." [7]

Sangster's inspiration was drawn from 3 themes he was passionate about: love, nature and religion. He wrote many poems about his experiences and was commended for his ability to express the beauty of Canada's landscapes. Sangster was often called the "father of Canadian poetry" because of this.[1] Many of the love poems from his 1st book were directed towards his 1st wife; the nature poems were of his travels.

For a man of limited education, Sangster had a vast vocabulary and an extraordinary knowledge of history, classics, mythology, and authors. His poems include an extensive knowledge of classic, historic, and mythological works, as well as British and American authors, including Shakespeare, Milton, Burns, Wordsworth, P.J. Bailey, and Longfellow.

Sangster was elected a Fellow of the Royal Society of Canada in 1882.[1] 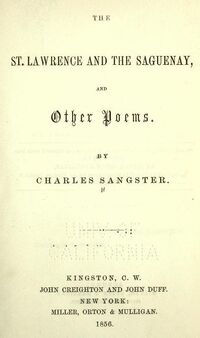 Retrieved from "https://pennyspoetry.fandom.com/wiki/Charles_Sangster?oldid=222163"
Community content is available under CC-BY-SA unless otherwise noted.