Birney was born in Calgary, Alberta (then part of the Northwest Territories). Raised on a farm in Erickson (near Creston), British Columbia, his childhood was somewhat isolated. After working as a farm hand, a bank clerk, and a park ranger, Birney went on to college to study chemical engineering but graduated with a degree in English.

Through a brief and quickly annulled marriage to Sylvia Johnston, he was introduced to Trotskyism. In the 1930's he was an active Trotskyist in Canada and Britain,[2] and was the leading figure in the Socialist Workers League but drifted away from the movement during World War II. During the war he served as a personnel officer in the Canadian Army (an experience that he used in his 1949 novel, Turvey).

In 1946 Birney began teaching at the University of British Columbia (UBC), where he founded and directed the earliest Canadian creative writing program. His work led to the establishment of Canada's 1st Department of Creative Writing at UBC. After 20 years at UBC, he left in 1965 to become the inaugural writer in residence at the University of Toronto.[1]

Birney's World War II experiences inspired the creation of the title character of his comic military novel, Turvey (1949), a saga of a hapless soldier's struggle to get to "the sharp end" of the fighting in Holland and Germany during 1944-45. The character of Turvey is a fascinating melange of country boy innocent, common sense utilitarian and town fool, and seems to have been fashioned as a foil to the eccentrically pseudo-sophisticated Canadian military life as illustrated in the novel. The book has been described as "uproariously ribald",[4] winning the Stephen Leacock Medal for Humour. Turvey was a Canadian bestseller, selling 30,000 copies.[5]

Birney published his 2nd novel, Down the Long Table, a Marxist novel about the Great Depression, in 1955. It did not match the earlier novel's success.[5]

Canadian Encyclopedia: "Beginning with David, and other poems (1942), Birney's poetry consistently explored the resources of language with passionate and playful curiosity.... Throughout his career Birney was an experimental poet, publishing over 20 books of verse that vary as widely in form and voice as they do in subject. His poems reveal his constant concern to render his encyclopedic experience - be it of Canada's geographical or cultural reaches, of nature, of travels or of the trials of love by time - into a language marvellously dexterous and supple, always seriously at play."[1]

The title work of David, "a poem about euthanasia, became quite a controversial poem, frequently anthologized and taught in Canadian literature courses." [6] "A generation of Canadian schoolchildren and university students has grown up knowing the story," Al Purdy wrote in 1974. "At one time or another in the last 25 years, 'David' has been required reading for high schools and universities in every Canadian province." [5]

By the time of Trial of a City, and other verse in 1952, literary critic Northrop Frye was calling Birney 1 of "Canada's two leading poets" (the other being E.J. Pratt).[7]

Birney's typography became increasingly more experimental during the 1960s, and in his 1966 Selected Poems he revised many of his older poems, dropping punctuation and sentence structure. He explained his reasoning in the preface to that book:

Our intricate system of speckles between words evolved comparatively recently and merely to ensure that prose became beautifully unambiguous -- Instant Communication. For a while the poets went along with this, even though what they were shooting at was the art of indefinitely delayed communication -- Indefinite Ambiguity. Belatedly but willingly influenced by contemporary trends, I've come to surround my pauses with space rather than with typographical spatter, and to take advantage of the new printing processes to free my work occasionally from the tyranny of one-direction linotype.[8]

In 1974, Birney was again being called "one of the two best poets in Canada," this time by Al Purdy (the other being Irving Layton).[5]

The Canadian Encyclopedia sums up: "In long poems and lyrics, sight poems, sound poems and found poems, whether on the page or in his collection of recorded poems with the percussion ensemble NEXUS (1982), Birney demonstrated his deep commitment to making language have meaning in every possible and eloquent way." [1]

The Royal Society of Canada awarded Birney its Lorne Pierce Medal for literature in 1953.[1]

In 1970 Birney was made an Officer of the Order of Canada. 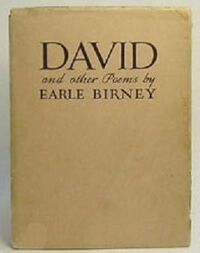 Except where noted, bibliographic information courtesy University of Toronto.[11]

Except where noted, film information from Internet Movie Database.[12]

Retrieved from "https://pennyspoetry.fandom.com/wiki/Earle_Birney?oldid=221674"
Community content is available under CC-BY-SA unless otherwise noted.