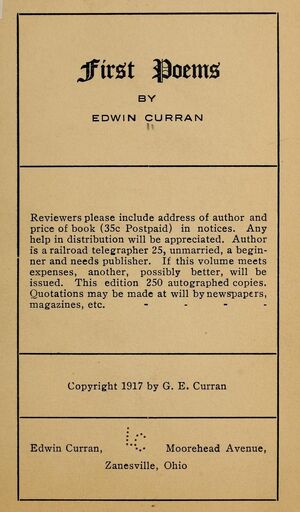 Curran was a railroad telegraph operator in Zanesville, Ohio.[2]

In 1917 he printed and offered for sale First Poems, 250 pamphlets of poetry. On the pamphlet cover, Curran unabashedly described himself as, "unmarried, a beginner and needs publisher." A reviewer for Reedy's Mirror, an early 20th-century literary magazine, favorably critiqued Curran's work, but noted he was "frequently repetitious."[2]

In 1920, Curran published Second Poems of Edwin Curran, which included the poem "Manhattan." Although Curran still shows a tendency to be repetitive in the poem, he displays skillful use of alliteration, personification and figurative language.[2]