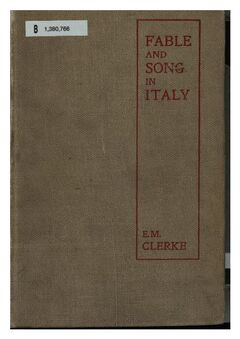 Clerke was born in Skibbereen, co. Cork, Ireland. Agnes Mary Clerke, also a writer on astronomy, was her sister; they were the children of Judge's Registrar, John William Clerke (circa 1807-1890) and his wife Margaret (born circa 1819).[1]

Clerke lived in Italy for 7 years, and contributed stories in Italian periodicals in the country. She was for many years an editorial writer for the London Tablet.[2]

Clerke also contributed to the Dublin Review,[3] and to the Dictionary of National Biography.[4]

Ellen Mary Clarke's poem "The Building and the Pinnacle of the Temple" was included in the Oxford Book of English Mystical Verse."[5]

Retrieved from "https://pennyspoetry.fandom.com/wiki/Ellen_Mary_Clerke?oldid=177526"
Community content is available under CC-BY-SA unless otherwise noted.