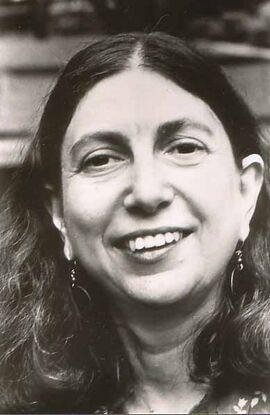 Dame was born in Beaver Falls, Pennsylvania. For many years, she and her husband, poet Donald Lev, lived in Brooklyn and in High Falls, New York, where they edited and published the literary tabloid Home Planet News. She was on the faculty of the New Jersey Institute of Technology and Rutgers University in New Brunswick, where she served as Associate Director of the Writing Program.

Dame's poems explored themes of urban life, Jewish history and identity, and political activism. She examined contemporary women's lives in persona poems that take on the voice of Eve, Lilith, or other woman from Jewish tradition. These poems often locate a kernel of feminist rebellion in familiar Biblical stories.

The 2007 anthology Broken Land: Poems of Brooklyn, edited by Julia Kasdorf and Michael Tyrell, was dedicated to her memory.[4]

Retrieved from "https://pennyspoetry.fandom.com/wiki/Enid_Dame?oldid=200302"
Community content is available under CC-BY-SA unless otherwise noted.