Ford Madox Ford (17 December 1873 - 26 June 1939) was an English poet, novelist, literary critic, and editor whose journals, The English Review and The Transatlantic Review, were instrumental in the development of early 20th-century English literature.

Ford Madox Ford (1873-1939), poet, novelist, essayist, and editor, was an important figure in the beginning years of the modernist movement. Ford’s poetry, although not studied much today, was considered elegant and formally interesting in its day; both Ezra Pound and D.H. Lawrence thought Ford one of the best poets of the 1910’s, and his style had an important influence on the Imagist movement . His finest novel, The Good Soldier (1915), features one of modernism’s best examples of the unreliable narrator; it is both a damning exploration of Edwardian sexual hypocrisy and an experiment in narrative mediation. The two journals for which Ford served as editor, the English Review and the Transatlantic Review, were incredibly important organs for the dissemination of modernist poetry and prose.

Ford was born Ford Hermann Hueffer in Merton, Surrey in 1873 into a family that was firmly ensconced within the artistic scene: his grandfather was the pre-Raphaelite painter Ford Madox Brown; his uncle was William Michel Rossetti, and Ford spent time with Swinburne, Dante Gabriel, and Christina Rossetti while young. After traveling a great deal during his childhood, Ford attended the University College School in London. At the age of 19, he converted to Catholicism.

In 1891, at the tender age of 18, Ford published The Brown Owl, a literary fairy tale. In 1894, he married Elsie Martindale; they would separate fourteen years later, but the two never divorced. Shortly after this marriage, in 1898, Ford began to collaborate with Joseph Conrad in a series of projects. Together, the two would publish The Inheritors (1901), Romance (1903), and other works. Ford’s later formal characteristics – the incessant circling around narrative events, an interest in oblique narration and delayed decoding, the use of impressionistic sensory details – were much influenced by Conrad.

Ford became one of the leading proponents of European literary theories in early 20th-century London. Seeking to provide a forum in which new, challenging works could find a home, Ford in 1908 began the English Review. The immediate reason for its founding was Ford’s desire to publish Thomas Hardy’s “The Sunday Morning Tragedy,” which had been rejected by a number of other periodicals. With Ford at the helm until 1910, the English Review published work by Hardy, Henry James, H.G. Wells, and D.H. Lawrence, among others.

Ten years after the publication of his experimental novel The Soul of London (1905), Ford published The Good Soldier. Parts of the novel, originally titled The Saddest Story, appeared in Wyndham Lewis’s BLAST. The text is an outstanding formal achievement in which chronology and causality are jumbled through a series of flashbacks filtered through the perspective and voice of the American John Dowell. If Ford’s early work exhibited visual impressionism, then The Good Soldier exemplified cognitive impressionism: Conradian delayed decoding forces the reader to confront epistemological uncertainty, as both narrator and reader furiously try to reconstruct narrative events and their meaning. The work put into practice some of the principles that Ford outlined in his 1913 essay "On Impressionism."

Ford served in the First World War, experiencing shell shock during the Battle of the Somme; his poem "Antwerp" was considered by T.S. Eliot to be one of the few good pieces of verse to emerge from the early months of the war. He also wrote a number of works of propaganda for the war effort. In 1919, Ford changed his name from Hueffer to Ford, due in part to his many marital problems, but also to the feeling that a German name might hurt sales of his books. He soon thereafter founded the Transatlantic Review, an important publication that printed the work of modernists like Ernest Hemingway, James Joyce, and Gertrude Stein.

In 1924 to 1928, Ford published his consciousness-driven, morally complex tetralogy of war experience Parade’s End. In his last years, Ford lived in the United States and taught literature at Olivet College in Michigan, continuing to promote literature and its study until his death in 1939.

The Good Soldier is frequently included among the great literature of the 20th century, including the Modern Library 100 Best Novels,[2] The Observer's '100 Greatest Novels of All Time',[3] and The Guardian '1000 novels everyone must read'.[4]

Ford is the model for the character Braddocks in Hemingway's novel, The Sun Also Rises. 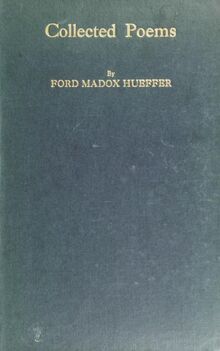 Retrieved from "https://pennyspoetry.fandom.com/wiki/Ford_Madox_Ford?oldid=233717"
Community content is available under CC-BY-SA unless otherwise noted.