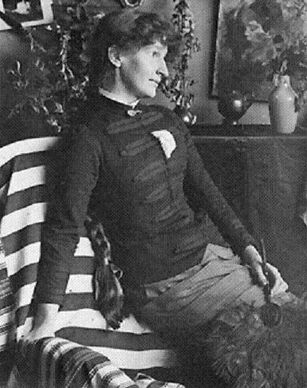 Bannerman studied art in Halifax with Forshaw Day, and in Paris with Auguste Feyen-Perrin and Edouard Krug. She was one of the earliest North Americans to incorporate aspects of Impressionism into her paintings. "Le Jardin d'hiver," a submission of hers to the 1883 Paris Salon, is the 1st Canadian subject ever to be shown in that venue.[2]

She maintained a studio (in Pont-Aven), and sold graphic work to illustrated London magazines.[2]

In 1886 she married English painter Hamlet Bannerman, and moved with him to England.

Arthritis and recurring influenza forced her to give up painting, and after her husband's death in 1895 she turned to poetry. A collection of her verses, Milestones, was published in 1899.[3]

In 1901 she moved to Italy, where she lived until the outbreak of World War II. She returned to England, dying at Torquay. Devon.[3]

Bannerman was the 1st woman to be elected an Associate of the Royal Canadian Academy (1882), following the charter membership of Charlotte Schreiber.[2]

Retrieved from "https://pennyspoetry.fandom.com/wiki/Frances_Bannerman?oldid=218493"
Community content is available under CC-BY-SA unless otherwise noted.