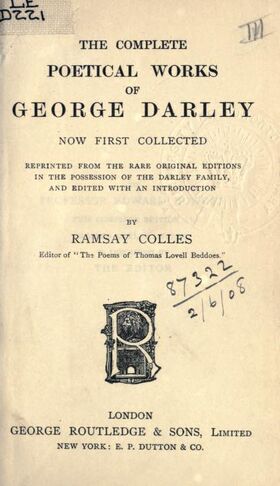 Darley was born at Dublin, and educted at Trinity College there. He early decided to follow a literary career, and went to London, where he brought out his first poem, Errors of Ecstasie (1822). He also wrote for the London Magazine, under the pseudonym of "John Lacy". In it appeared his best story, "Lilian of the Vale." Various other books followed, including Sylvia' or. The May queen: A poem (1827). Thereafter he joined the Athenæum, in which he showed himself a severe critic. He was also a dramatist and a profound student of old English plays, editing those of Beaumont and Fletcher in 1840. So deeply was he imbued with the spirit of the 17th century that his poem, "It is not beauty I desire," was included by F.T. Palgrave in the first edition of his Golden Treasury as an anonymous lyric of that age. He was also a mathematician of considerable talent, and published some treatises on the subject. Darley fell into nervous depression and died in 1846.[1]

Darley, a son of Arthur Darley of Dublin, was born in that city in 1795. He entered Trinity College, Dublin, in 1815, aged 20 (College Entrance Book), earning a B.A. degree as late as 1820;[2] but an unfortunate stammer prevented him from going into the church or to the bar.[3] His academical career may have been retarded by the opposition of his family to his following the literary profession, which caused a total estrangement from them.[2]

Coming to London he published in 1822 The Errors of Ecstacie, a singular dialogue between a Mystic and the Muse, remarkable, however, for the melody of the blank verse. About the same time he became connected with the London Magazine, in which, under the signature of "John Lacy," he wrote a series of letters to the dramatists of the day, censuring their preference of the "poetic" to the "rhetoric’ style. His own practice, when he came to write dramas, did not entirely correspond with his precepts, and he awarded high praise to Beddoes's Bride's Tragedy, the work of one whose genius was far more poetical than dramatic. His criticism is printed at the end of the play in Beddoes's works.[2]

Besides "Olympian Revels" and other minor contributions, he wrote in the London Magazine his best story, "Lilian of the Vale," a thrilling and poetical conception, and containing the only composition of his that ever attained popularity, the favourite song, "I've been Roaming." It was published in 1826, under the pseudonym of Guy Penseval, along with other tales collectively entitled The Labours of Idleness. The title was not inappropriate, for, with the exception of "Lilian," the stories, of which the "Dead Man's Dream" is the most remarkable, may not unfairly be described as laborious strivings after imaginative effect, missing their object by over-elaboration.[2]

In 1827 appeared his lyrical drama, Sylvia, or the May Queen, admired by Coleridge and Mrs. Browning, a very unequal work. The poetical portions are full of fancy and melody, the prose is a somewhat clumsy imitation of the Elizabethans. Darley's prose suffered from his engrossing study of the early English writers, and from the recluse habits engendered by the impediment of speech under which he laboured, which made the shy and sensitive author almost a stranger to society. His melancholy and irritability were increased by the ill success of his writings;[2] but about 1830.he became dramatic and art critic to the Athenaeum.[3]

"What wonder," says Miss Mitford, "that the disenchanted poet should be transmuted into a cold and caustic critic, or that the disappointed man should withdraw into the narrowest limits of friendly society, a hermit in the centre of London!" With these qualifications for a censor Darley joined the staff of the Athenæum, and made himself conspicuous for the asperity of his blame when he disapproved, though he does not seem to have been niggardly of praise when he thought it merited. "He took up the position of dramatic reviewer," says Chorley, "in the most truculent and uncompromising fashion conceivable." His condemnatory notice of Talfourd's Ion was attributed to Chorley; "the damage done me," says the latter, "was inconceivable."[2]

Darley also travelled in Italy, and wrote to the Athenæum letters on art, remarkable as in some measure anticipating the reaction in favour of the early Italian painters. About 1839 he privately circulated the first two cantos of a little poem entitled Nepenthe,’ concerning which he says in a letter to Chorley: "Canto i. attempts to paint the ill effects of over joy; canto ii. those of excessive melancholy. Part of the latter object remains to be worked out in canto iii., which would likewise show that contentment with the mingled cup of humanity is the true Nepenthe." This was never printed, nor was the Lämmergeyer, a poem or play mentioned in another letter to Chorley.[2]

"Printed," says Miss Mitford, "with the most imperfect and broken types upon a coarse, discoloured paper, like that in which a country shopkeeper puts up his tea, Nepenthe is as gorgeous and glaring within as homely and sordid externally. There is no reading the whole, for there is an intoxication about it that turns one's brain" — a verdict amply justified by the description she quotes of the self-cremation of the phoenix.[2]

Darley's tragedies, Thomas à Becket (1840) and Ethelstan (1841) are far inferior; the language is frequently poetical, but still more frequently affected, and there is a total want of truth to nature.[2]

In 1840, supplying the place of Southey, he edited Beaumont and Fletcher, with a preface full of acute criticism, but rather unfairly depreciatory of his authors.[4]

Darley was a remarkable instance of a poet who was not only a mathematician but a writer on mathematics. From 1826 to 1828 he wrote for Taylor's series of popular scientific treatises A System of Popular Geometry, A System of Popular Algebra, A System of Popular Trigonometry, and The Geometrical Companion, the last-named particularly noticeable from the numerous illustrations derived from matters of ordinary observation. Carlyle, who was himself a fair mathematician, describes Darley as "considerable in that department," and "an amiable, modest, veracious, and intelligent man."[4]

Many of his poetical works remained in manuscript at his death, of general decline, 23 November 1846.[4]