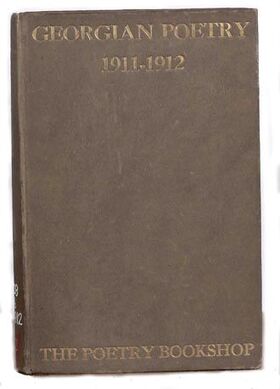 Georgian Poetry was the title of a series of anthologies showcasing the work of a school of English poetry that established itself during the early years of the reign of King George V.

Edward Marsh was the general editor of the series and the center of the circle of Georgian poets, which included Rupert Brooke. It has been suggested that Brooke himself took a hand in some of the editorial choices.

The idea for an anthology began as a joke, when Marsh, Duncan Grant and George Mallory decided, one evening in 1912 to publish a parody of the many small poetry books that were appearing at the time. After some discussion it was decided to pursue the idea in all seriousness. Marsh and Brooke approached the poet and bookseller Harold Monro who had recently opened The Poetry Bookshop at Devonshire Street, London. He agreed to publish the book in return for a half share of the profits.

Subsequent to the final anthology of five, further collections appeared edited by J.C. Squire, which were probably intended to take on the mantle. The subsequent fate of the Georgian poets (inevitably known as the Squirearchy) then became an aspect of the critical debate surrounding modernist poetry, as marked by the publication of The Waste Land at just that time. The Georgian poets became something of a by-word for conservatism, but at the time of the early anthologies they saw themselves as modern (if not modernist) and progressive. The most important figures, in literary terms, would now be considered D.H. Lawrence and Robert Graves: neither of them 'typical'.

Retrieved from "https://pennyspoetry.fandom.com/wiki/Georgian_Poetry?oldid=236337"
Community content is available under CC-BY-SA unless otherwise noted.