Hector de Saint-Denys Garneau was the grandson of poet Alfred Garneau and great-grandson of historian Francois-Xavier Garneau. He spent his early years at his family's ancestral manor (which his mother had purchased) in Sainte-Catherine-de-Fossambault (now Sainte-Catherine-de-la-Jacques-Cartier), Quebec, where his cousin Anne Hébert was born in 1916.[3]

Garneau moved to Montreal with his parents in 1923. There, he studied the classics at three Jesuit colleges: College Sainte-Marie de Montreal]], Jean de Brebeuf, and Loyola.[4]

In 1925, Garneau studied painting at Montreal's College des beaux-arts under Paul-Emile Borduas, Jean Palardy, Marjorie Smith and Jean-Paul Lemieux. He won a bronze medal and 2nd prize for a work of art. In 1934 he exhibited some paintings at the Galerie des Arts in Montreal and in 1937 he presented his painting "Sky Fall" at the Museum of Fine Arts.[5]

In 1934, Garneau developed a rheumatic heart problem and discontinued his studies. He then devoted his time to writing poems, painting and music. In 1937, Regards et jeux dans l'espace (Looking and Playing in Space), his collection of poems, was published. "Disillusioned by the volume's reception, he withdrew to the seclusion of the family manor house ... where he died in 1943, apparently of a heart attack, while canoeing alone."[2] 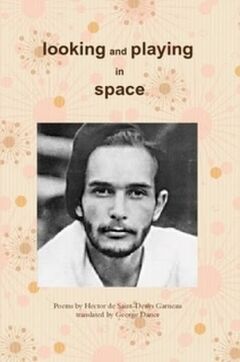 Garneau achieved some notice as a poet as a boy of 13, when his poem "Le dinosaure" took 1st prize in a province-wide essay competition. 2 years later he was awarded a prize by the Canadian Authors' Association for his poem "L'automne."[7]

Garneau wrote poetry prolifically between 1934 and 1937; on a single day alone (October 22, 1937), he reportedly wrote 13 poems.[8] In his lifetime, though, he published only a single slim volume: The 28-poem Regards et jeux dans l'espace, which "deals with his rural childhood, nostalgically evoking a state of grace beyond recall.... The poet's spiritualized landscapes transpose suffering and intermittent ecstasy into images of overgrown pathways, distant birds in flight, or forest fires, or again a snowbound house with shuttered windows, a key symbol of confinement and flawed security."[1]

"Radical in its form, with its unrhymed lines of various lengths, its lack of punctuation and its broken syntax, Saint-Denys Garneau's poetry was equally original in its themes (the spiritual adventure of the poet, the nature of artistic creation, the search for purity) and in its ironic distance."[2]

According to Quebec poet John Glassco (who translated Garneau's Journal into English), seeing his work in print left Garneau "stricken with horror: he felt he had exposed himself in a manner so much at variance with his natural reserve, his shrinking from all display, that he suffered a nervous breakdown. He had ... the sensation of having actually violated and soiled himself."[9] One story is that he went back to the shops that were carrying his book, and bought up all 1,000 copies himself. In any case, Garneau "never published again."[9]

After Garneau's death, his unpublished poems were collected by Elie under the title "Les Solitudes", and published in 1949 together with Regards... as Poesies completes: Regards et jeux dans l'espace, Les solitudes.[6] Garneau's "influence only became apparent after the publication of his Poesies completes in 1949," says the Dictionary of Literary Biography. "Since that time the number of studies on his life and work has multiplied considerably.... Perhaps only Émile Nelligan has been the object of so much critical attention" in Quebec.[10] By 1960, Garneau was "considered the major precursor of contemporary French-Canadian poetry."[11]

Garneau's 1935-1939 diary was published in Montreal in 1954 under the title Journal, edited by Elie and Le Moyne and with a preface by Gilles Marcotte. Glassco published his translation, The Journal of Hector de Saint-Denys Garneau, in 1962.[6]

Also in 1962, Canadian poet F.R. Scott translated 10 of Garneau's poems into English for his book, Saint-Denys Garneau and Anne Hebert. Glassco published his translated Complete Poems of Hector de Saint-Denys Garneau in 1975.[12] Glassco's book won the Canada Council Award for translation that year.[13] Regards et jeux dans l'espace was also translated into English in 2011 by George J. Dance, and published that year as Looking and Playing in Space .

Garneau's poetry has also been also translated into Spanish by Luis Vicente de Aguinaga, and was published in 2007 as Todos y cada uno.[14]

Some of Garneau's poems have been set to music by Canadian contemporary classical composer Bruce Mather,[15] and by Quebec folk group Villeray.[16]

On September 8, 2003, to commemorate the 50th anniversary of the National Library of Canada, Canada Post released a special commemorative series, "The Writers of Canada", with a design by Katalina Kovats, featuring 2 English-Canadian and 2 French-Canadian stamps. 3 million stamps were issued. The 2 French-Canadian authors chosen were Saint-Denys Garneau and his cousin, Anne Hébert.[17]

Saint-Denys Garneau, along with Octave Crémazie and Émile Nelligan, is commemorated by a large ceramic mural by Georges Lauda, Paul Pannier, and Gérald Cordeau at Crémazie metro station in Montreal. Entitled Le Poète dans l'univers, the work features an excerpt from his poem "Faction."

Retrieved from "https://pennyspoetry.fandom.com/wiki/Hector_de_Saint-Denys_Garneau?oldid=219708"
Community content is available under CC-BY-SA unless otherwise noted.