Abbey was born in Ridout (now part of Kingston), New York, to Caroline (Vail) and Stephen Abbey. He attended Kingston Academy, the Delhi Institute, and the Hudson Institute, but was financially unable to attend college. In his 20's he worked as assistant editor at the Rondout Courier and later at the Orange Spectator in Orange, New Jersey, contributing verse to these and other publications. By the late 1860's he had graduated to national magazines like Appleton's, Chambers', and the Overland Monthly.[1]

He published his first collection of poetry privately in 1866, and a second private collection in 1866 before his first commercial volume, published by D. Appleton & Co. in 1872. He would continue to release books, both self-published and through Appleton, at intervals of every few years until his death.[1]

In 1865 Abbey married Mary Louise DuBois of Kingston; they had no children. In 1864 he became a teller in the Rondout Bank, and later worked with his father and his brother Legrand in their grain, flour, and feed business.[1] He became a successful banker – a director, vice president and then president of the State of New York National Bank of Kingston[2] – while continuing his involvement in literary circles in both Kingston and New York City, such as the Pfaff Group (which included Walt Whitman and Artemus Ward), the Authors' Club, and the Shakespeare Society.[1]

Abbey died in Tenafly, New Jersey, of heart disease.[1] He is buried in Montrepose Cemetery, Kingston.[2]

Wikipedia: "In much of his work, Abbey displays traditional characteristics of the 19th-century American poetic approach. He uses inversions and has fluid feel; his style takes notable influence from that of English poet Leigh Hunt. The Bedouin's Rebuke can be compared to Hunt's Abou Ben Adhem, which employs similar metric flow. Abbey was fond of simple subject matter, such as remorse or happiness -- his poetry often forms an anecdote or short story which builds in intensity, reaches a climactic struggle between two opposing entities, and then ends in an implied moral. His poetry is reminiscent of the Romantic Era, with particular influence from Shelley and Coleridge. He remains relatively well known with the poetry-reading public, as well as a respected figure in literary circles."[3]

Abbey was invited to read his long poem, on the 20th (Ulster County) New York Militia in the Battle of Gettysburg, at the unveiling of the monument to the 20th at Gettysburg in 1888.[2]

On his tombstone was inscribed, "The Bard of Kingston."[1] 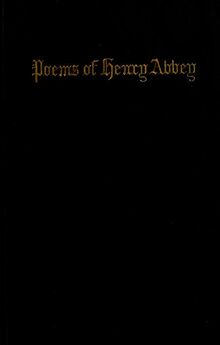 Retrieved from "https://pennyspoetry.fandom.com/wiki/Henry_Abbey?oldid=197186"
Community content is available under CC-BY-SA unless otherwise noted.