She was born Isabel Ecclestone Macpherson in Woodstock, Ontario the daughter of Priscilla Ecclestone and Donald McLeod Macpherson. She was educated at the Woodstock Collegiate Institute.[2]

She became a staff writer for the Woodstock Daily Express in 1895 (at 15 years of age), and wrote for the paper until 1905 under the name "Heather." Starting in 1894, she began contributing short stories and poems to other Canadian newspapers.

She would publish more than 300 poems, stories, and sketches between 1894 and 1928, many to prestigious magazines including Harper's, Scribner's, McClure's, The Youth's Companion, St. Nicholas Magazine, Ainslee's, Red Book, and Life.[1]

She married Peter J. Mackay,[3] in April 1895. She would bear him 3 daughters, Phyllis, Margaret, and Janet Priscilla.[2]

Her earliest published books were Miss Witterly's China, a magazine story printed as a pamphlet by the Woman's Missionary Society of the Methodist Church in Toronto in 1896; and Pansies for Thoughts (1898), a booklet of poems published by the Woodstock Public Library. Her poems were included in the 1900 anthology Selections from Scottish-Canadian poets.[4] Her debut commercial book of poetry, Between the Lights, was published in 1904.[2]

In 1909 the Mackays moved to Vancouver,[3], where Peter Mackay became chief stenographer for the British Columbia Supreme Court.[4] Isabel Mackay took a job editing the Canadian Courier, which she would do for a year.[1]

In addition to her fiction and poetry, Mackay wrote plays. "Her one-act play The Last Cache was presented at Toronto's Hart House Theatre on 17 May 1927, and the following year, on 30 March, Two Too Many: A comedy in three acts was presented by the Canadian Literature Club of Toronto at the Margaret Eaton Theatre." Of her unpublished plays, Matches was performed by the Little Theatre of Vancouver, and The Changeling by the Hart House Summer School Players.[1]

Mackay was an executive of the trust fund that published Legends of Vancouver in 1911 to financially support Pauline Johnson.[4] She looked after Marjorie Pickthall during the final year of the poet's life. She "was a generous host to many other writers, both in Vancouver and in the MacKays' summer home at Boundary Bay."[1]

The Canadian Magazine called her "one of the cleverest writers we have, adding: "In prose she displays a keen, analytical mind, a genius for new ideas, and a style that is easy and convincing. In poetry she has a philosophic turn, an artful and subtle conception of a circumstance."[2]

The Woodstock Sentinel-Review wrote that she "has a sensitive ear for the music of words and an instinctive feeling for rhythm. She has both imagination and humour and a keen appreciation of the wonderful and the beautiful."[2]

Mckay wrote 6 novels mainly of small-town Ontario, which the Dictionary of Literary Biography (DLB) says "were enthusiastically reviewed and noted for their psychological insight. For example, The Window Gazer (1921) was hailed as a courageous novel because of its candid treatment of the theme of sexuality." The DLB itself notes "Mackay's powerful depictions of female experience. For example, the theme of The House of Windows (1912) is the poverty and exploitation of working-class urban women; Up the Hill and Over (1917), a novel about drug addiction, features an all-female family ... and Blencarrow (1926) ... portrays the victimization of a woman and her daughters by an alcoholic and drug-crazed husband."[1] Up the Hill and Over was praised by the (London) Times Literary Supplement as a "well-studied picture of a woman who has yielded to the curse of drugs."[4]

Mckay's poetry was for the most part conventional Victorian era verse, "of historical interest rather than lasting literary value." Pauline Johnson and Marjorie Pickthall, both close friends, were major influences.[1] "In an appreciation of Pickthall, Mackay made her only explicit pronouncements on poetics: in seeing poetry as a mystical escape from everyday constraints, her views were typical of late-Victorian romanticism."[4]

Her book of children's poetry, The Shining Ship, and other verse for children, has been compared favorably with Robert Louis Stevenson's A Child's Garden of Verses and Walter de la Mare's Peacock Pie.[1]

MacKay twice won the annual Toronto Globe prize for best poem on a Canadian historical subject: for "Marguerite de Roberval" in 1907, and for "The Passing of Cadieux." in 1909.[1]

In 1929 her 3-act comedy Goblin Gold (published in 1933) took 1st prize in the drama section of the Canadian Governor-General's literary competition.[1]

Over 50 of her poems and stories have been reprinted in various Canadian anthologies.[1] 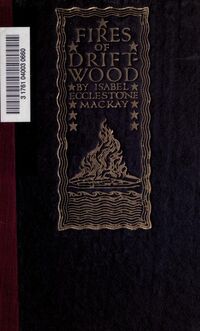 Retrieved from "https://pennyspoetry.fandom.com/wiki/Isabel_Ecclestone_Mackay?oldid=220846"
Community content is available under CC-BY-SA unless otherwise noted.