Mangan was born at Dublin, son of a small grocer, was brought up in poverty, and received most of his education from a priest who instructed him in several modern languages. He then became a lawyer's clerk, and was later an assistant in the library of Trinity College, Dublin. He contributed verses of very various merit to a number of Irish newspapers, and translations from the German to The Dublin University Magazine. By some critics his poetical powers were considered to be such as to have gained for him the 1st place among Irish poets; but his irregular and intemperate habits prevented him from attaining any sure excellence. His best work, generally inspired by the miseries of his country, often rises to a high level of tragic power, and had his strength of character been equal to his poetic gift it is difficult to say to what heights he might have attained. He died of cholera.[1]

Mangan was born James Mangan (the “ Clarence” being his own later addition) in Dublin.[2] His father, James Mangan, a native of Shanagolden, co. Limerick, had, after marrying Catherine (Smith) of Fishamble Street (whose family belonged to Kiltale, co. Meath), commenced business in Dublin in 1801. The son James was educated at a school in Saul's Court, Dublin, where he learned Latin, Spanish, French, and Italian, under Father Graham, an erudite scholar.[3]

However, in a few years the elder Mangan, who boasted of the terror with which he inspired his children, found himself bankrupt through imprudent speculation and extravagant hospitality. The burden of supporting the family fell on James, who entered a scrivener's office at the age of 15.[2]

For 7 years he toiled in a scrivener's and for 3 years in an attorney's office, earning small wages, and being subject to merciless persecution from his fellow-clerks on account of his eccentricities of manner. He soon contracted a fatal passion for drink, from which he never freed himself.[3]

As early as 1822 Mangan had contributed ephemeral pieces of verse to various Dublin almanacs. In 1831 he became a member of the Comet Club, which numbered some of the leading Dublin wits among its members, and he contributed verse to their journal, the Comet, generally over the signature of 'Clarence,' which he subsequently adopted as one of his Christian names. He also wrote for a notorious sheet called The Dublin Penny Satirist. He had mastered German in order to read German philosophy, and it was to the Comet that he sent his first batch of German translations.[3]

Dr. Todd, the eminent antiquary, gave him some employment in the library of Trinity College, and about 1833 Dr. Petrie found him a place in the office of the Irish ordnance survey, but his irregular habits prevented his success in any walk of life.[3]

In 1834 his first contribution to the Dublin University Magazine appeared, and much prose and verse followed in the same periodical, the majority being articles on German poetry with translations. He also issued many pieces which he pretended were renderings from the Turkish, Persian, Arabic, and Coptic.[3] He was wholly ignorant of those languages, but his wide reading in books about the East enabled him to give an oriental colouring to his verse. Nor were his adaptations of Irish poetry made directly from the originals, for he was ignorant of Irish, and depended on prose translations made for him by Eugene O'Curry and John O'Daly.[4]

His connection with the Dublin University Magazine brought important additions to his scanty income, but his indulgence in drink was inveterate, and rendered him incapable of regular application. He wrote only at fits and starts and lived a secluded life.[4]

About 1839 he became acquainted with Charles Gavan Duffy, who was then editing the Belfast Vindicator, and to this journal Mangan sent some characteristically humorous pieces, using the signature of "The Man in the Cloak." When the Nation was started in 1842, with Duffy as editor, Mangan wrote for the second number over the signatures of "Terræ Filius" and "Vacuus." Duffy treated him generously and gave him for a time a fixed salary, but Mangan's excesses led to difficulties between them. His contributions to the paper for the next 3 years were few.[4]

Mangan never married. In his fanciful and untrustworthy autobiography, which first appeared in the Irish Monthly of 1882, and is included among his Essays in Prose and Verse, he relates an unhappy love-story, of which he claimed to be the hero. His personal appearance is described by Duffy: "When he emerged into daylight he was dressed in a blue cloak, midsummer or midwinter, and a hat of fantastic shape, under which golden hair as fine and silky as a woman's hung in unkempt tangles, and deep blue eyes lighted a face as colourless as parchment. He looked like the spectre of some German romance rather than a living creature." (Young Ireland, 1883, p. 297)[4]

After 1845 he wrote more regularly for the 'Nation,' but when the second editor, Mitchel, left it in 1848, Mangan followed him and became a contributor to Mitchel's new paper, the United Irishman. Poems of his also appeared in the Irishman of 1849, a paper started after the temporary suppression of the Nation, as well as in the Irish Tribune (1848) and Duffy's Irish Catholic Magazine (1847), the latter a venture of the publisher Duffy (not the editor of the Nation).[4]

The various signatures adopted from time to time by Mangan were, besides those already mentioned, "A Yankee," "Monos," "The Mourne-r," and "Lageniensis," all of which were used in the 'Nation' between 1846 and 1848.[4]

Mangan's friends sought in vain to induce him to take the temperance pledge from Father Mathew. At length his mode of life brought on an illness which necessitated his confinement to St. Vincent's Hospital in May 1848. On his recovery he met with an accident and was obliged to enter Richmond Surgical Hospital. Finally he caught the cholera, in the epidemic that raged in Dublin in 1849, and died in Meath Hospital on Wednesday, 20 June 1849.[4]

Hercules Ellis tells a sensational story to the effect that on proceeding to the hospital he heard from the house-surgeon that Mangan's death was not caused by cholera but by starvation. He also says that "in his pocket was found a volume of German poetry, in translating which he had been engaged when struck down by illness. In his hat were found loose papers on which his last efforts in verse were feebly traced by his dying hand" (Romances and Ballads, Introd. p. xiv).[4]

Mangan was probably the greatest of the poets of Irish birth, although his merits have been exaggerated by some of his editors. His translations and paraphrases are remarkably spirited, and his command of language is no less notable than his facility in rhyming and his ear for melody.[4]

Mangan never wrote for any journal out of Ireland. About 1845 it was proposed to bring out an edition of his poems in London, Gavan Duffy offering to bear a portion of the expense, but nothing came of the proposal. 30 of Mangan's ballads were issued in Hercules Ellis's Romances and Ballads of Ireland, Dublin, 1850. An incomplete edition of his poems, edited by Mitchel, appeared in New York in 1859.[4]

In 1884 the Rev. C. P. Meehan edited a collection of his Essays in Prose and Verse; but this fails to include an interesting series of sketches by him of prominent Irishmen which appeared in the Irishman of 1849.[4]

A portrait of him, drawn after his death, was executed by Mr. (now Sir) F. W. Burton, and is in the National Gallery, Dublin.[4]

Yeats considered Mangan one of the best Irish poets, claiming, "To the soul of Clarence Mangan was tied the burning ribbon of Genius."

James Joyce wrote a significant essay on Mangan, and also used his name in his works, e.g. Araby in Dubliners. The significance, it is said, lies in part in Joyce's reluctance to acknowledge influence from the Irish literary tradition: he was otherwise chary of adopting any artistic predecessors.

Among the contemporary Irish writers he has influenced are Thomas Kinsella, Michael Smith, James McCabe (author of the hoax autobiography) and David Wheatley, author of a sonnet sequence on Mangan. He is also cited by the song writer Shane MacGowan as an inspiration, both for his work and his lifestyle.

Private papers of Mangan are held in the National Library of Ireland, the Royal Irish Academy, and the archives of Trinity College, Dublin. 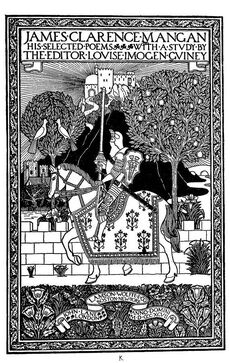 Retrieved from "https://pennyspoetry.fandom.com/wiki/James_Clarence_Mangan?oldid=192467"
Community content is available under CC-BY-SA unless otherwise noted.