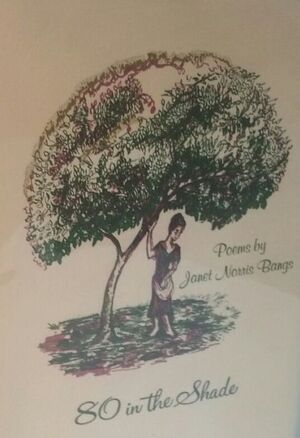 Bangs was born in La Moille, Illinois, the daughter of Margaret (Hoge) and William Clarkson Norris. She was educated at Princeton (Illinois) High School, and then attended Wellesley College, where she earned an A.B. in 1907. She married Edward Hugh Bangs in 1910.[2]

She lived for a time in Riverside, Cook County, Illinois.[1]

Her verse was published in newspapers, magazines, and anthologies. She also did volunteer work for children's aid and conservation groups, gave lectures, and was a member of the League of Women Voters, Bookfellows, the Chicago Ethical Societry, an the Chicago Wellesley Club.[2]

She is buried in Cyrus Hills Cemetery in La Moille.[1]

Retrieved from "https://pennyspoetry.fandom.com/wiki/Janet_Norris_Bangs?oldid=197531"
Community content is available under CC-BY-SA unless otherwise noted.