Blewett was born Mary Jane McKishnie (or McKishney) in Scotia, Kent County, Ontario,[3] to Janet (MacIntyre) and John McKishnie, both originally from Argyllshire, Scotland. She was related, through her mother, to Gaelic poet Duncan Ban MacIntyre.[4] Her brother Archibald P. McKishnie was a novelist; and her sister, Mrs. W.W. Snider, and cousin, Eve Brodlique Summers, also worked as journalists.[3]

She was educated at St. Thomas Collegiate Institute. She married Bassett Blewett in 1889.[4]

She was the editor of the Homemakers Department of the Toronto Globe (later the Globe and Mail) from 1898 to 1925.[5] She also wrote for Everyman's World, sometimes under the pen name Katherine Kent.[3]

Globe magazine called her a “woman’s poet” and described her verse as "an everyday sort of poetry, simple in theme and treatment, unpretentious, domestic, kindly, humorous and natural".[4] It also called her the “most conspicuous example in Canada of the class of writers who try to bring the plain people into touch with the highest ideals.... Her lessons are of self-denial, and of the power of love to mould men and women.”[7]

Parks Canada calls her a popular poet, whose work was admired by her contemporaties "for the directness and simplicity of theme and form and for the occasional whimsical note".[2]

Blewett won a prize from the Chicago Times-Herald for her poem, "Spring."[7]

She was awarded an International Poetry Prize in 1896. She was declared a Person of National Historic Significance in 1948.[3]

The railroad stop of Blewett, Saskatchewan is purported to be named for her.[5] 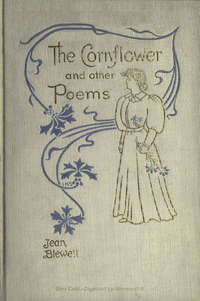 Retrieved from "https://pennyspoetry.fandom.com/wiki/Jean_Blewett?oldid=218623"
Community content is available under CC-BY-SA unless otherwise noted.