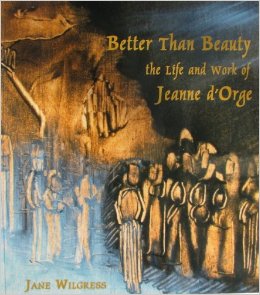 D'Orge was born Lena Yates in Stockport, Cheshire, England. After her father, a seed merchant, deserted the family, her mother took her to Edinburgh, where she grew up.[1]

In England, she wrote a number of children's books under the pen name Lena Dalkeith.[1]

While on a walking tour of France, she met American geographer Alfred Burton, later to become the dean of M.I.T. The 2 married, and D'Orge immigrated with her mother to the United States, both living with Burton in Newton Grange, Massachusetts.[1]

D'Orge joined the [Others poetry group, and began publishing poetry in Alfred Kreymborg's Literary magazine Others: A magazine of the new verse, as well as in Scribner's and Poetry. She read at the Others poetry reading in the 1913 Armory Show, along with William Carlos Williams, Marianne Moore and Wallace Stevens.[2]

D'Orge moved with her 3 children to Carmel, California, in 1920, followed by her husband a year later. The couple became active in the Forest Theater. D'Orge also began painting.[2]

In 1928 D'Orge left her husband to live with Carl Cherry, who ran the Forest Theater's lighting. Cherry's mother gave the couple a house in Carmel, which they turned into a studio for D'Orge to paint and a workshop for Cherry to pursue his inventions.[2]

In 1936 Cherry invented the blind rivet, which was widely used during World War II in airplane manufacturing, and which earned him a fortune. The couple continued to live as poor people, using their money to establish and fund the Cherry Foundation to "further the culture of America by sponsoring experimental fine arts, sciences and education." The Foundation sponsored a variety of concerts, lectures, plays, puppet shows, dance recitals and seminars, nearly all of them free, featuring world class lecturers and performers.[2]

After Cherry died in 1947, D'Orge continued to administer the Foundation. In those years she acquired a reputation as an eccentric, who "often appeared on the streets of Carmel wearing a big pink hat, ankle length Chinese robes and paint-stained tennis shoes."[2]

Retrieved from "https://pennyspoetry.fandom.com/wiki/Jeanne_D%27Orge?oldid=200851"
Community content is available under CC-BY-SA unless otherwise noted.