Askham was born at Wellingborough, Northamptonshire, in a cottage just off the Market Street, adjoining White Horse Yard, on 25 July 1825.[1] His father, John Askham, a native of Raunds in the same county, was a shoemaker, and his mother came from Kimbolton. He was the youngest of a family of 7 children, only 2 of whom survived. He attended Freemans School, but before he was 10 years old had been taken out to work in his father's shop.[2]

As an adult, John Askham earned his living as a shoemaker, and taught himself to read and write.[3] At the age of 25,inspired by an acquaintance who wrote political doggerel, he began composing poetry.[2] He soon also began publishing his poetry, originally in local newspapers, and then from 1863 in books financed by subscriptions.[3].

In 1871 Askham ran in Wellingborough's 1st-ever school board election, and won: "an indication of the esteem that the town had for this self-educated shoemaker poet."[2] He went on to hold other local government offices.[3]

Askham was married twice, to a woman named Bonham, who bore him 3 daughters, and after her death to a woman named Cox.[3] Askham's daughter by his 2nd marriage died at 8 years of age, and his only son at 8 months. It is said that "these personal tragedies ... gave much of his work its distinctive grace and charm, tinged with sadness. He threw himself into his work and more volumes of his poetry were published."[2]

Askham himself died, "paralyzed by illness," in 1894. He is buried in Wellingborough's London Road Cemetery.[3]

The 1901 Dictionary of National Biography says of him: "Askham is a good example of the uneducated poet. He was especially fond of the sonnet. The fidelity of his nature poetry was remarkable when it is considered that, unlike his predecessor, John Clare (1793-1864), he had rare opportunities of enjoying country life."[1] 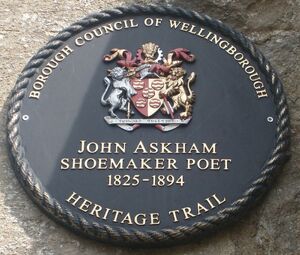 Askham is commemorated with a heritage trail and a plaque in Wellingborough.[2]

Retrieved from "https://pennyspoetry.fandom.com/wiki/John_Askham?oldid=228275"
Community content is available under CC-BY-SA unless otherwise noted.