John Reade FRSC (November 13, 1837 - March 26, 1919) was an Irish-born Canadian poet, journalist, and essayist, once considered "the grand old man of Canadian letters." He is best known as the literary editor of the Montreal Gazette, a position he held for almost 50 years.[1]

John Reade was born in Ballyshannon, co. Donegal, Ireland, in 1837, the son of Frances (Smyth) and Joseph Reade.[2]

He was educated at Portora School, Enniskillen], and Queen's College, Belfast.[1]

Reade immigrated to Canada with his parents in 1856, settling in Montreal. Within a year he had founded and was editing Montreal Literary Magazine. In 1859 he became rector of Lachute Academy, and began studying theology. He was ordained an Anglican minister in 1865, and served in 2 parishes (Mascouche and Mansonville) before leaving the ministry in 1867 due to ill health.[1]

Returning to Montreal in 1868, Reade began writing for the Montreal Gazette. In 1870 he became the newspaper's literary editor, and held that position until his death in 1919.[1]

At the Gazette Reade was best known for his weekly column, "Old and New," but he also wrote "hundreds of unsigned editorials, reviews, and articles" for the paper. In addition, he "published poems, essays, translations, or short fiction in virtually all of the major Canadian journals of his day."[1]

8 of Reade's poems were published in the 1864 anthology, Selections from Canadian Poets. His own book, Merlin's Prophecy, and other poems (a book "steeped in Victorian Romanticism "), appeared in 1870.[3] The book included Reade's translations of Aeschylus, Euripides, Homer, Horace, and Virgil.[1]

"Merlin's Prophecy," which used the form of Tennyson's Idylls of the King, was a purported prophecy of contemporary Canada and the British Empire, which Reade wrote to commemorate Prince Arthur's 1869 visit to Canada. John Lesperance called it "the most perfect poem ever written in Canada."[1]

The Dictionary of Canadian Biography notes that although Reade "was appropriately identified in his later years as 'the grand old man of Canadian letters,' his reputation has not fulfilled the dream of his friend John Boyd that 'no anthology of Canadian verse will ever be complete without a wide selection from John Reade's work, rich as it is in content and faultless in its technique.' Despite such praise, the late-Victorian personal, political, and poetic values characteristic of Reade's poetry and criticism led to their general disregard within a few years of his death."[1]

Rose-Belford's Canadian Monthly and National Review printed Reade's long poem, "Madeleine de Vercheres," in 1878.[1] In 1889, W.D. Lighthall selected "Madeleine" and 2 other Reade poems for his anthology Songs of the Great Dominion: "Hastings," which he used to begin the book, and "The Winter Carnival." Reade, Lighthall declared, was "one of the chief figures in Canadian literature, and probably the sweetest poet."[6]

He was awarded an honorary doctorate from the University of Ottawa in 1909.[3] 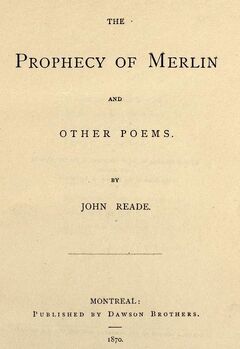 Except where noted, bibliographic information courtesy Dictionary of Canadian Biography.[1]

Retrieved from "https://pennyspoetry.fandom.com/wiki/John_Reade?oldid=221939"
Community content is available under CC-BY-SA unless otherwise noted.