Dorr was born Julia Caroline Ripley at Charleston, South Carolina, the daughter of Zulma Caroline (Thomas) and William Young Ripley.[2] When she was still a child her mother died; she moved to Vermont with her father in 1830.[1]

Her first published writing appeared in 1848. Without her knowledge, her husband sent one of her poems to a magazine, which published it. She then wrote and published two novels under the pen name Caroline Thomas, subsequently using her real name.[3]

She died in Rutland, Vermont, and is buried in that town's Evergreen Cemetery.[2] 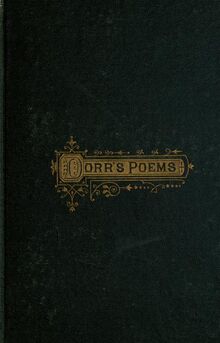 Retrieved from "https://pennyspoetry.fandom.com/wiki/Julia_C.R._Dorr?oldid=200871"
Community content is available under CC-BY-SA unless otherwise noted.