Lascelles Abercrombie (9 January 1881 - 27 October 1938) was an English poet and literary critic, perhaps best known today as a member of the Dymock poets.

Abercrombie was born in Ashton upon Mersey[1] and educated at Malvern College,[2] and at the University of Manchester.

Before World War I, he lived for a time at Dymock in Gloucestershire, part of a community that included Rupert Brooke and Robert Frost. Edward Thomas also visited.

In 1922 Abercrombie was appointed Professor of English at the University of Leeds in preference to J.R.R. Tolkien, (with whom he shared, as author of The Epic (1914), a professional interest in heroic poetry).[3]In 1929  Abercrombie moved to the University of London, and in 1935 to a prestigious readership at Oxford University.[1]

He wrote a series of works on the nature of poetry, including The Idea of Great Poetry (1925) and Romanticism (1926). He also published several volumes of original verse, largely metaphysical poems in dramatic form, and a number of verse plays. His poems and plays were collected in Poems (1930). In the same year he published separately his most ambitious poem, 'The Sale of Saint Thomas' in six 'Acts'. [1]

"Complex and cerebral in style," the Columbia Encyclopedia says of Abercrombie, "his poetry often expressed his distaste for 20th-century industrialism."[4]

A number of fellow poets and professors of literature (including Oliver Elton and Una Ellis-Fermor) admired the sublimity of his themes and his ability to clothe metaphysical thought in vivid imagery.(Citation needed) His critical studies of Hardy (1912) and Wordsworth (published posthumously) are still sometimes referred to.Template:Whom? He is remembered because of his contacts with Edward Marsh, Rupert Brooke, and other 'Georgian' poets, and sometimes called the "Georgian poet laureate.' 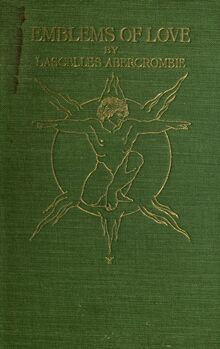 Retrieved from "https://pennyspoetry.fandom.com/wiki/Lascelles_Abercrombie?oldid=227373"
Community content is available under CC-BY-SA unless otherwise noted.