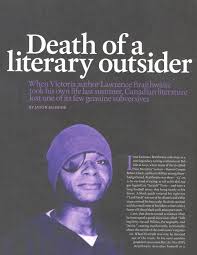 He is the author of the legendary cult novel, Wigger.[2]

Braithwaite was born in Montreal, Quebec, the youngest of 4 children.

He studied film at Dawson College.[3]

He spent 12 years as a clerk in the Canadian military. He was discharged after after an accident in which his leg was broken in several places.[3]

After having a story published in the anthology Queeries: An anthology of gay male prose, he moved to Victoria, British Columbia, where he wrote his 3 novels, as well as poetry and book reviews.[3]

He died at the age of 45, of an apparent suicide (though a suicide note was never found).[3]

He is buried in Notre-Dames-des-Neiges Cemetery, Montreal, Quebec.

Braithwaite has been called “one of the outstanding Canadian prose writers alive” (Gail Scott) and linked to the "New Narrative" movement,[4] a term coined by Steve Abbott.[5]. He utilized the intensity of the New York City No Wave scene and the Los Angeles and Montreal hardcore punk music subcultures to compose his narrative.

Braithwaite's work has been praised by Dodie Bellamy for its "sublime impenetrability".[6] and is fueled by a modernist and Fredric Jameson-influenced late modernist approach to writing and recording. His work draws influences from the musical and social realism of punk rock, opera, musique concrète, noise, hip hop, rap, industrial, black metal, country music and dub.

Retrieved from "https://pennyspoetry.fandom.com/wiki/Lawrence_Ytzhak_Braithwaite?oldid=228057"
Community content is available under CC-BY-SA unless otherwise noted.