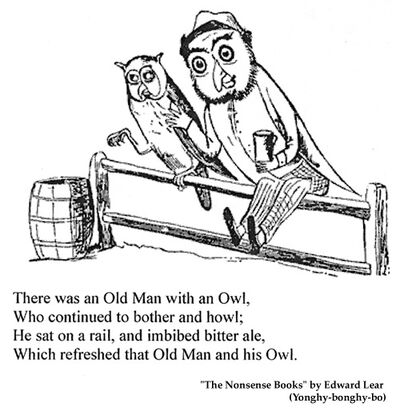 A limerick is a type of witty, humorous, or sometimes nonsense verse,[1] a form of light verse.

The limerick is a quintain (a poem of 5 lines) of anapestic}} or |amphibrachic}} meter with a strict rhyme scheme of A-A-B-B-A. The three a lines are trimeter (three feet, and the two B lines are dimeter (two feet).

(As the above example by Lear shows, a limerick can also be written as a quatrain or four-line poem, with the two B lines replaced by one internally rhyming Alexandrine.

The defining "foot" of a limerick's meter is usually the anapaest (ta-ta-TUM), but limericks can also be considered to use the amphibrach (ta-TUM-ta).

The first line traditionally introduces a person and a place, with the place appearing at the end of the first line and establishing the rhyme scheme for the second and fifth lines. In early limericks, the last line was often essentially a repeat of the first line, although this is no longer customary.

Within the genre, ordinary speech stress is often distorted in the first line, and may be regarded as a feature of the form: "There WAS a young MAN from the coast;" "There OONCE was a GIRL from DeTROIT. Legman takes this as a convention whereby prosody is violated simultaneously with propriety.[2]

Exploitation of geographical names, especially exotic ones, is also common, and has been seen as invoking memories of geography lessons in order to subvert the decorum taught in the schoolroom; Legman finds that the exchange of limericks is almost exclusive to comparatively well-educated males, women figuring in limericks almost exclusively as "villains or victims". The most prized limericks incorporate a kind of twist, which may be revealed in the final line or lie in the way the rhymes are often intentionally tortured, or both. Many limericks show some form of internal rhyme, alliteration or assonance, or some element of word play.

The following example of a limerick is of unknown origin.

The limerick* packs laughs anatomical                   *(pronounced "lim'rick" to preserve meter)
In space that is quite economical,
But the good ones I've seen
So seldom are clean,
And the clean ones so seldom are comical.

Verses in limerick form are sometimes combined with a refrain to form a limerick song, a traditional humorous drinking song often with obscene verses.

The limerick is considered to have a folk origin, with oral and therefore unrecorded beginnings.

Gershon Legman, who compiled the largest and most scholarly anthology, held that the true limerick, as a folk form, is always obscene, and cites similar opinions by Arnold Bennett and George Bernard Shaw,[3] describing the clean limerick as a periodic fad and object of magazine contests, rarely rising above mediocrity. From a folkloric point of view, the form is essentially transgressive; violation of taboo is part of its function.

The first recorded use of the form (though not as nonsense verse) appears to be in the 17th century by Robert Herrick, in "The Night Piece, to Julia.[4]

Let not the dark thee cumber:
What though the moon does slumber?
The stars of the night
Will lend thee their light
Like tapers clear without number.

Other examples of the form can be found in England as of the early years of the 18th century.[5]

The limerick form was popularized by Edward Lear in his first Book of Nonsense (1845) and a later work (1872) on the same theme although he did not use the term 'limerick'. Lear wrote 212 limericks and other nonsense verse. It was customary at the time for limericks to accompany an absurd illustration of the same subject, and for the final line of the limerick to be a kind of conclusion, usually a variant of the first line ending in the same word.

The following is an example of one of Edward Lear's limericks.

There was a Young Person of Smyrna
Whose grandmother threatened to burn her*;

But she seized on the cat,
and said 'Granny, burn that!

You incongruous old woman of Smyrna!'

(Lear's limericks were often typeset in three or four lines, according to the space available under the accompanying picture.)

Origin of the nameEdit

The origin of the name limerick for this type of poem is debated. As of several years ago, its usage was first documented in England in 1898 (New English Dictionary) and in America in 1902, but in recent years several earlier uses have been documented. The name is generally taken to be a reference to the City or County of Limerick in Ireland[6][7] sometimes particularly to the Maigue Poets, and may derive from an earlier form of nonsense verse parlour game that traditionally included a refrain that included "Will [or won't] you come (up) to Limerick?"[8]

The earliest known use of the name "Limerick" for the form is an 1880 reference, in a Saint John, New Brunswick newspaper, to an apparently well-known tune "Won't you Come to Limerick." Apparently the limerick could be sung to that tune.[9]

[Pie]:There was a young rustic named Mallory,
who drew but a very small salary.
When he went to the show,
his purse made him go
to a seat in the uppermost gallery.

The idiosyncratic link between spelling and pronunciation in the English language is explored in this Scottish example (the name Menzies is pronounced 11px /ˈmɪŋɪs/ ming-iss).

A lively young damsel named Menzies
Inquired: "Do you know what this thenzies?"
Her aunt, with a gasp,
Replied: "It's a wasp,
And you're holding the end where the stenzies."[11]

The limerick form is so well known that it can be parodied in fairly subtle ways, such as the following example, attributed to W.S. Gilbert:

Retrieved from "https://pennyspoetry.fandom.com/wiki/Limerick_(poetry)?oldid=144376"
Community content is available under CC-BY-SA unless otherwise noted.