Bowman was born Lily Louise Dyer Morey in Sherbrooke, Quebec.[1] Her father was Chief Inspector of the Eastern Townships Bank. She was educated by tutors and then at Dana Hall in Wellsley, Massachusetts.[2]

In 1909 she marrried Archibald Abercrombie Bowman, an electrical engineer, and the couple settled in Toronto .[2]

Louise Morey Bowman's debut collection of poetry, Moonlight and Common Day, was published in 1922.[3] It was reviewed positively in Poetry by Harriet Monroe, who applauded Bowman's "modern and individual imagination." A 2nd collection, Dream Tapestries, followed in 1924.[2]

The Bowmans moved to Montreal in 1926.[3] The city's mountain inspired her long poem, "The Mountain that Watched."[2]

In 1927, Poetry published Bowman's "Waxworks," a series of poems "inspired by jazz rhythms."[2]

In 1937, she served as president of the Montreal branch of the Canadian Authors Association.[3]

Her 3rd book of poetry, Characters in Cadence, was published in 1938 "and almost completely ignored."[2]

On Bowman's death, , the Montreal Star praised her as “one of the most authentic of the younger lyric poets of this Dominion” and “a writer of rare sincerity, who possessed both vision and a keen sense of beauty.”[3]

In her 2000 volume Hidden Rooms: Early Canadian women poets, Wanda Campbell says of her: "Though now completely ignored, Bowman is intriguing not only for her subject matter, which touches on a variety of feminist subjects including representations of women in art, mythology, and modern society, but also for her technique, which ranges from the haiku to the long poem."[2]

Wikipedia says of her: "Imagism could have given Bowman a method to set her self free from the past, but she was unable to break away from the grip of the Romanticism which dominated the Canadian literary scene. Consequently, her poems are a confusing mixture of the old and new. Thus her work, when considered as a whole, is of too low a quality to make her a major poet."[4] 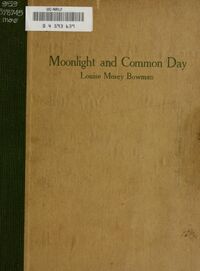 Retrieved from "https://pennyspoetry.fandom.com/wiki/Louise_Morey_Bowman?oldid=218694"
Community content is available under CC-BY-SA unless otherwise noted.