In 1911 she entered the University of California, Berkeley, where she won the Bohemian Club prize and the Emily Cook Prize for Poetry as a freshman; but dropped out after a year.[1]

She moved to New York City, where she supported herself by hack literary work, while also writing poetry in her spare time.[1]

Her earliest book was published in 1918. Soon after, she moved back to Oregon and married Leland Davis (a marriage which ended in divorce). During the 1920's she published in magazines that included Collier’s, Cosmopolitan, Good Housekeeping, McClure’s, and Poetry, and in prominent anthologies like the Bookman Anthology of Verse and Modern American Poetry. She was elected president of the Women's Press Club of Oregon in 1920, and president of the Northwest Poetry Society in 1924.[1]

In 1930 she moved back to New York, and published little in the following decade. In 1940 the Oregonian reported that she was destitute; the paper's poetry editor visited her in New York, and found her living in a "deplorable state." There is no record of her death.[1]

In 1912 Davies became the 1st woman to win the Bohemian Club Prize for poetry.[2] 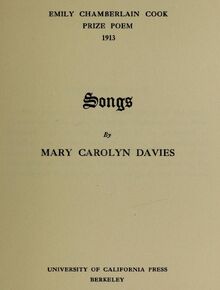 Retrieved from "https://pennyspoetry.fandom.com/wiki/Mary_Carolyn_Davies?oldid=210832"
Community content is available under CC-BY-SA unless otherwise noted.