De Acosta wrote almost a dozen plays, only 4 of which were produced,; she also published a novel and 3 volumes of poetry.[1] She was professionally unsuccessful but is known for her many lesbian affairs with famous Broadway and Hollywood personalities, and numerous friendships with prominent artists of the period.[2] [3]

It was a reputation not appreciated by everyone. As Alice B. Toklas, the lover of Gertrude Stein, wrote to a disapproving friend, Anita Loos,

"...you can't dispose of Mercedes lightly—she has had the two most important women in the US — Greta Garbo and Marlene Dietrich."[4]

4 of de Acosta's plays were produced, and she published a novel and 3 collections of poetry.

Acosta was born in New York City in 1893 to a Cuban father, Ricardo de Acosta (of Spanish descent), and a Spanish mother, Micaela Hernandez de Alba y de Alba, reportedly a descendant of the Spanish Dukes of Alba. She had several siblings: Aida, Ricardo Jr, Angela, Maria, and Rita. The last would become a famous beauty best known as Rita Lydig.

Although talented in her professional field, it is no doubt her personal life that has made her famous in Hollywood circles. She became involved in numerous lesbian relationships with Hollywood's elite, claimed many more, and did not attempt to hide her sexuality.

In 1916 she began an affair with actress Alla Nazimova, and shortly thereafter started an affair with young actress Tallulah Bankhead, and later dancer Isadora Duncan. Shortly after marrying Abram Poole in 1920, de Acosta became involved in a turbulent 5-year relationship with actress Eva Le Gallienne. The 2 women vacationed and travelled together often, at times visiting the salon of famed writer and socialite Natalie Barney in Europe.[5] De Acosta wrote 2 plays for Eva during that time, Sandro Botticelli and Jehanne de Arc. Neither were successful, and the combined financial failures of both plays and de Acosta's possessive and jealous nature brought the affair to an end.[5]

Over the next decade she amassed an ensemble of female partners, all of whom were either rising stars, or aging stars. These included Rudolph Valentino's alleged fiancée, actress Pola Negri, who went on to star in films for UFA during the 1930's, writer Edith Wharton, writer and stage actress Katharine Cornell, socialite Dorothy ("Dickie") Fellowes-Gordon, and with writer Amy Lowell.

De Acosta was involved with married Russian ballerina Tamara Platonovna Karsavina throughout her life, after their 1st meeting in 1920. The 2 were as much friends as overs, and Karsavina was among the few who continued to be friendly toward de Acosta following the controversial autobiography released by the latter, exposing many of her relationships to the public.

In 1931, she met and claims to have quickly become involved with Greta Garbo. The two were introduced to one another by de Acosta's lover at the time, author Salka Viertel. Her relationship with Garbo has often been described as "the love of her lifetime".

It is unknown from all information from the time if Garbo shared those feelings. However, Garbo was in control of the affair, and the two would be together for lengthy periods often taking vacations together, then apart for long spells without Garbo even acknowledging de Acosta, and everything was at the will of Garbo. In 1944, Garbo ended the on-again off-again relationship. At that time, she insisted de Acosta stop sending her poems and letters professing her love. The last known poem written by de Acosta for Garbo was written that same year. By all accounts, de Acosta remained in love with Garbo for the remainder of her lifetime.

In the 1930's Mercedes had acquired an interest in Eastern spirituality through one of her acquaintances, Princess Norina Matchabelli, a follower of the Indian mystic Meher Baba. For many years de Acosta was captivated by Meher Baba and spent time in his company when he visited Hollywood. In fact, Meher Baba made mention of de Acosta's affection for Greta Garbo, saying they had been married in a previous life (of Garbo, Meher Baba said she was the most spiritual of the Hollywood actresses of that era). De Acosta also went to India to meet with Meher Baba. Over the years however she lost focus on Meher Baba until the 1950s, when she met him for the last time.[6][7] According to her published memoir Here Lies the Heart, Mercedes also met Ramana Maharishi, with whom she was more impressed than she was with Meher Baba.

Her memoir, Here Lies the Heart,[8] was published in 1960 because Mercedes was seriously ill with a brain tumor and in need of money.

Its revelations, though highly sanitized and supported as fact, resulted in the severing of numerous friendships of famous women who preferred their sexuality remain private, including that of the mercurial Garbo. Eva Le Gallienne in particular was furious, and completely did away with anything reminding her of de Acosta. Many denounced her as a liar, stating that she invented these stories for fame. This is unlikely, as most of the affairs have been confirmed through personal correspondence, and many of the affairs were known to Hollywood insiders, but were kept out of the headlines for the sake of the actresses' careers. (Citation needed)

She found herself cut off from many of her friends and increasingly in financial straits. De Acosta died at age 75 in relative poverty and obscurity.

She is buried with her mother and sister, Rita Lydig[9] at Trinity Cemetery in Washington Heights, New York City. 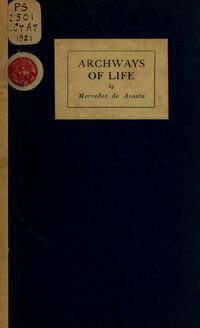