Page was the author of over 30 published books: of poetry, fiction, travel diaries, essays, children's books, and an autobiography.[2]

She was also known as a visual artist, who exhibited her work as P.K. Irwin at a number of venues in and out of Canada. Her works are in permanent collections of National Gallery of Canada and Art Gallery of Ontario.

Page was born in Swanage, Dorset, England and moved with her family to Canada in 1919. Page's parents moved her to Red Deer, Alberta in 1919, when she was only 3, and later to Calgary and Winnipeg.[3]

Page said her parents were creative, encouraging non-conformists who loved the arts, recited poetry and read to her. She credited her early interest in poetry to the rhythms she unconsciously imbibed as a child.[4] A year in England when she was 17 opened her eyes to galleries, ballets and concerts.

Page later moved to Saint John, New Brunswick, "where she worked as a shop assistant and radio actress during the late 1930s."[5] During that time Page befriended New Brunswick poets Kay Smith and Jean Sweet, and the three met regularly to read and critique each others' poetry.[6]

In 1941 Page moved to Montreal and came into contact with the Montreal Group of poets, which included A.M. Klein and F.R. Scott.

She became a founding member of Patrick Anderson's Preview magazine in 1942,[5] and of its successor, Northern Review, in 1945. Some of her poetry appeared in the modernist anthology, Unit of Five, in 1944, along with poems by Louis Dudek, Ronald Hambleton, Raymond Souster, and James Wreford.[5]

Later she became a scriptwriter at Canada's National Film Board, where she met W. Arthur Irwin, a former editor of Maclean's magazine, whom she married in 1950.[4] Following her marriage, "Page devoted her time to writing the poetry collection The Metal and the Flower (1954), for which she received a Governor General's Award."[5]

Page travelled with her husband on his diplomatic postings to Australia, Brazil, Mexico and Guatemala. In Brazil and Mexico, not hearing the rhythms of spoken English, she said, "I had a long dry spell, so I started painting and keeping a journal," published as Brazilian Journal and illustrated with her own paintings.[4] She began writing poetry again following her return to Canada in the mid 1960s.[5]

Her visual art, under her married name as P. K. Irwin, is in galleries and private collections, including the National Gallery of Canada in Ottawa.[8]

She spent the last years of her life in Victoria, British Columbia.

Her early poems "were inward-looking, imaginary biographies," which "rely heavily on suggestive imagery and the detailed depiction of concrete situations to express social concerns and transcendental themes ... such poems as 'The Stenographers' and 'The Landlady' focus on isolated individuals who futilely search for meaning and a sense of belonging. 'Photos of a Salt Mine' considered one of Page's best early poems, examines how art both conceals and reveals reality"[5]

Northrop Frye wrote about her 1954 volume, The Metal and the Flower, that "if there is anything such as 'pure poetry,' this must be it: a lively mind seizing on almost any experience and turning it into witty verse.... Miss Page's work has a competent elegance about it that makes even the undistinguished poems still satisfying to look at."[9]

Her later works showed "a new austerity in form and a reduction in the number of images presented." As well, there is a difference in type of image: "her later poems are often set abroad and suggest a path of liberation for the isolated, alienated individual.... Such poems as 'Bark Drawing' and 'Cook's Mountains' contain images outside the self as does 'Cry Ararat!' - a poem concerning the reconciliation of internal and external worlds, in which Mount Ararat symbolizes a place of rest [in] between."[5]

Critic George Woodcock has said that Page's "most recent poems are more sharply and intensely visual than ever in their sensuous evocation of shape and color and space; their imagery takes us magically beyond any ordinary seeing into a realm of imagining in which the normal world is shaken like a vast kaleidoscope and revealed in unexpected and luminous relationships."[5]

Page won the Governor General's Award in 1954 for The Metal and the Flower, and the Canadian Authors Association Award in 1985 for The Glass Air.[7]

By special resolution of the United Nations, in 2001 Page's poem "Planet Earth" was read simultaneously in New York, the Antarctic, and the South Pacific to celebrate the International Year of Dialogue Among Civilizations.[1]

Page's poems have been translated into other languages.[10] A symposium on her work, "Extraordinary Presence: The Worlds of P.K. Page", was held in 2002 at Trent University.[11]

Her last collection, Coal and Roses, was posthumously shortlisted for the Griffin Poetry Prize.[11]

Page was the subjet of a 1990 National Film Board of Canada documentary, Still Waters: The poetry of P.K. Page, directed by Donald Winkler.[13]

A $1,000 poetry prize is awarded annually by the Malahat Review in Page's name.[14] Its editor, Marilyn Bowering, said, "[Her] accomplishments have been an inspiration to several generations of writers," and declared that the award, called the P.K. Page Founders' Award for Poetry, would formalize Page's "long association with the Malahat Review."[14] 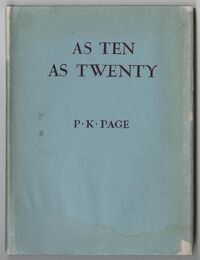 Retrieved from "https://pennyspoetry.fandom.com/wiki/P.K._Page?oldid=221684"
Community content is available under CC-BY-SA unless otherwise noted.