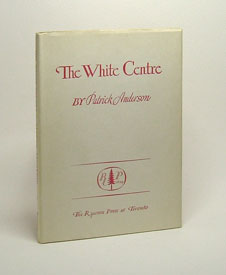 Anderson was born at Ashtead, Surrey, England. He was educated at Oxford and at Columbia University, New York. He came to Canada in 1940, and taught at a private school from then until 1946.[2]

Louis Dudek later said of Anderson in those days: ""He was quite impressive, brilliant, a great talker, a real personality, and made much of by the people at Preview; within that limited circle, they were just as enthusiastic about him as later masses of kids were about Leonard Cohen. It's the same quality of undiluted admiration and praise."[4]

Anderson, who was gay (at a time when homosexuality was illegal in Canada), was publicly outed by John Sutherland, editor of rival Montreal magazine First Statement, in 1943.[5] Sutherland published a review of Anderson's poetry in First Statement, which suggested homoerotic themes in Andersons's writing, and accused him of "some sexual experience of a kind not normal."[6] Although Anderson would come out as gay later in life, he was married at the time to Peggy Doernbach, and threatened to sue.[7] Sutherland printed a retraction in the following issue.[8] Queen's Professor Robert G. May comments:

At a time when the Second World War was playing an important role, as Justin D. Edwards writes, in shaping Canada’s cultural identity and “in idealizing masculine tropes,” Sutherland’s “masculinist” and “homophobic” tirade betrayed the critic’s “anxiety regarding the construction of a Canadian modernist canon that is impure, dishonest, unwholesome, feminine, and gay”.... Anderson’s reputation never quite recovered from Sutherland’s attack (despite the critic’s subsequent retraction), and for years he has been recognized more as the mild-mannered editor of the poetry journal Preview than as a poet in his own right.[5]

Preview merged with First Statement in 1945 to become Northern Review. [9] Despite becoming an assistant professor at McGill University in 1948, Anderson left Canada in 1950, not to return until 1971.[2]

During his absence from Canada, Anderson held teaching positions in Britain and Malaysia, and wrote numerous travel books and biographies, including 2 autobiographies.[2] One of the latter, Snake Wine, was reissued in 1980 by Oxford University Press;[10] the following is from that book's description:

Snake Wine, first published in 1955, is an account of Patrick Anderson's two years at the University of Singapore as lecturer in English between 1950 and 1952. The original blurb of the book states 'for a while he lived in a lonely house on the edge of bandit-infested jungle'.... The publishers feel justified in reissuing the book as it is one of the most interesting accounts in English of the pre-independence, and pre-industrialization period. Patrick Anderson had an unjaded eye, an unconventional mind, a taste for the exotic, a keen sense of the droll and a lively interest in the diversity of human manners and motives.[11]

Anderson lived the last part of his life in Canada and England. He died in Halstead, Essex.[1]

His poetry was anthologized in the Penguin Book of Canadian Verse.

Retrieved from "https://pennyspoetry.fandom.com/wiki/Patrick_Anderson_(poet)?oldid=218338"
Community content is available under CC-BY-SA unless otherwise noted.