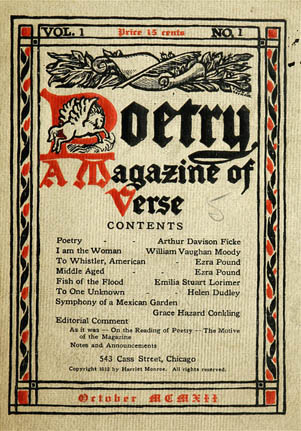 Poetry: A magazine of verse is one of the leading monthly poetry journals in the English-speaking world.

Poetry has been published in Chicago, Illinois , since its founding in 1912. Published by the Poetry Foundation and currently edited by Christian Wiman, the magazine has a circulation of 30,000 and prints 300 poems per year out of approximately 90,000 submissions.[1] Poetry has been financed since 2003 with a $200 million grant from Ruth Lilly.

In 1911, Harriet Monroe, who was working as an art critic at the Chicago Tribune, convinced 100 Chicagoans to pledge $50 a year, for the next 5 years, to support a poetry journal. The first issue was published in October, 1912.[2]. She wrote at that time:

The Open Door will be the policy of this magazine - may the great poet we are looking for never find it shut, or half-shut, against his ample genius! To this end the editors hope to keep free from entangling alliances with any single class or school. They desire to print the best English verse which is being written today, regardless of where, by whom, or under what theory of art it is written. Nor will the magazine promise to limit its editorial comments to one set of opinions.

In a circular she sent to poets, Monroe said the magazine offered:[1]

First, a chance to be heard in their own place, without the limitations imposed by the popular magazine. In other words, while the ordinary magazines must minister to a large public little interested in poetry, this magazine will appeal to, and it may be hoped, will develop, a public primarily interested in poetry as an art, as the highest, most complete expression of truth and beauty.

A.R. Ammons once said, "the histories of modern poetry in America and of Poetry in America are almost interchangeable, certainly inseparable."[1] However, in the early years, East Coast newspapers made fun of the magazine, with one calling the idea "Poetry in Porkopolis".[1] Author and poet Jessica Nelson North was an editor. Henry Rago joined the magazine in 1954 and became editor the following year.

In 2003, the magazine received a grant from the estate of Ruth Lilly originally said to be worth over $100 million, but which grew to be about $200 million when it was given out. The grant added to her already substantial prior contributions.

The magazine learned in 2001 that it would be getting the grant. Before announcing the gift, the magazine waited a year and reconfigured its governing board, which had been concerned with fund-raising. The Poetry Foundation was created, and Joseph Parisi, who had been editor of the magazine for two decades, volunteered to head the foundation. Christian Wiman, a young critic and poet, succeeded to the editorship in 2003. Parisi resigned from the foundation after a few months.[1] The new board used a recruiting agency to find John Barr, a rich executive and published poet, to head the foundation.[1] Since receiving the grant, the magazine has increased its budget. For instance, poets who previously received two dollars per line now get ten.[1]

Since Wiman took over, and partly thanks to direct-mail campaigns, the magazine's circulation has grown from 11,000 to almost 30,000. The look of the magazine was redesigned in 2005.[1] Wiman has "expressed in print a stern preference for formal poems, and a disdain for what he calls 'broken-prose confessionalism' and 'the generic, self-obsessed free-verse poetry of the seventies and eighties", according to a New Yorker magazine article.[1]

A top goal of his for the magazine was to get more people "talking about it," he has said. "I tried to put something in every issue that would be provocative in some way." Wiman hired several young, outspoken critics and encouraged them to be frank. In 2005, Wiman wrote in an editorial "Not only was there a great deal of obvious logrolling going on (friends reviewing friends, teachers promoting students, young poets writing strategic reviews of older poets in power), but the writing was just so polite, professional and dull [...] We wanted writers who wrote as if there were an audience of general readers out there who might be interested in contemporary poetry. That meant hiring critics with sharp opinions, broad knowledge of fields other than poetry, and some flair."[1]

In September 2006, the magazine published an essay by John Barr, head of the Poetry Foundation, titled, "American Poetry in the New Century," which became controversial, generating many complaints and some support. After having heard a talk Barr gave on the subject, Wiman had asked Barr to submit it to the magazine.[1]

"American poetry is ready for something new because our poets have been writing in the same way for a long time now. There is fatigue, something stagnant about the poetry being written today," Barr wrote. He added that poetry is nearly absent from public life, and poets too often write with only other poets in mind, failing to write for a greater public. Although M.F.A. programs have expanded greatly, the result has been more poetry but also more limited variety. He wrote that poetry has become "neither robust, resonant, nor — and I stress this quality — entertaining."[1]

Barr suggested that poets get experience outside the academy. "If you look at drama in Shakespeare's day, or the novel in the last century, or the movie today, it suggests that an art enters its golden age when it is addressed to and energized by the general audiences of its time."[1]

Dana Goodyear, in an article in The New Yorker reporting and commenting on Poetry magazine and The Poetry Foundation, wrote that Barr's essay was directly counter to the ideas of the magazine's founder, Harriet Monroe, eight decades before. In a 1922 editorial, Monroe wrote about newspaper verse: "These syndicated rhymers, like the movie-producers, are learning that it pays to be good, [that one] gets by giving the people the emotions of virtue, simplicity and goodness, with this program paying at the box-office." Monroe wanted to protect poets from the demands of popular taste, Goodyear wrote, while Barr wants to induce poets to appeal to the public. Goodyear acknowledged that popular interest in poetry has collapsed since the time of Monroe's editorial.[1]

Wiman says he agrees with a lot of what Barr says about contemporary poetry.[1]

The magazine offers several prizes for poems it has published. According to its website,[5] the prizes include:

Retrieved from "https://pennyspoetry.fandom.com/wiki/Poetry_(magazine)?oldid=234944"
Community content is available under CC-BY-SA unless otherwise noted.