Ram Krishna Singh is an Indian poet and academic, whose main fields of interest consist of Indian English writing, especially poetry, and English for Specific Purposes, especially for science and technology.

Dr. Singh started his career in journalism, as a Compilation Officer in the District Gazetteers Department, Lucknow, 1973, and a Journalist with the Press Trust of India, New Delhi, 1973-74. Changing to teaching he became a Lecturer at the Royal Bhutan Polytechnic, Deothang, Bhutan, 1974-76. Joining the Indian School of Mines in Dhanbad as a Lecturer from 1976-83, he then rose to Assistant Professor in 1983. Professor of English and Head of the Institute’s Department of Humanities and Social Sciences from 1993 to 2012, and Professor (Higher Academic Grade) from 2012 to Dec 31, 2015, he is now happily retired and pursuing his personal interests.

A reviewer, critic, and contemporary poet who writes in Indian English, Dr. Singh is the author of 50 books, more than 170 research articles and 175 book reviews. His works have been anthologized in about 200 publications, while his editorial activities extend to include guest-editing of Language Forum, 1986, 1995, and Creative Forum, 1991, 1997, 1998, besides being co-editor of the latter publication from 1987-90, General Editor of Creative Forum New Poets Series, and service on the editorial boards of Canopy, Indian Book Chronicle, Indian Journal of Applied Linguistics, Reflections, International Journal of Translation, Poetcrit, Impressions of Eternity (ie), SlugFest, and International Journal of Advanced Multidiciplinary Scientific Research. He has evaluated about 50 PhD theses from various universities. He has also edited the ISM Newsletter for about five years.

File:Prof. ram krishna singh india.pdf In recognition of his achievements Professor Singh has received several awards and honours, among them:

Professor Singh’s biography appears in over 35 publications in the United Kingdom, United States, India and elsewhere. 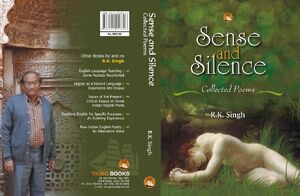