Representative Poetry Online (RPO) is an online anthology of poetry maintained by the University of Toronto (UofT).

RPO was founded in 1994 by Ian Lancashire of the UofT's Department of English.[1] The current version, Representative Poetry Online, edition 6.0, contains roughly 4,800 poems in English and French by over 700 poets, spanning a period of 1400 years.[2]

The site had its genesis in the printed poetry anthology Representative Poetry (1912), edited by F.J. Alexander (the first professor of English appointed to the UofT's University College) and his assistant, William Hall Clawson.[1] Covering only British poetry of the 18th and 19th centuries, it included 92 poems by 14 poets and eight anonymous ballads. Selling price was $1.00 (later increased to $1.30). 1,500 copies were printed, with 375 sold the first year. It became the first best-seller for the new University of Toronto Press.[3]

A second edition was printed in 1916. By reducing the type size, using two columns, and increasing the selling price to $1.50, the editors were able to include 404 poems by 69 poets, from Thomas Wyatt to William Morris. The 2,600 copies were sold by 1920, and a third edition that year added 25 Canadian poems by Bliss Carman, Archibald Lampman, John McCrae, Marjorie Pickthall, and Duncan Campbell Scott. Fourth and fifth editions followed in 1923 and 1928.[3]

In October 1930, the Department appointed a Supervising Committee, which recommended that the book be completely revised. An editorial committee was appointed, and the sixth edition was printed in two volumes in 1935. American poets were included for the first time. Revisions appeared in 1938, 1941, and 1946, and a supplement containing works by Chaucer and other pre-1500 poets was published in 1947.[3]

By the seventh edition (called the "third edition" on its title pages), the anthology had grown to three volumes printed over two years (Vol. I in 1962, Vols. II-III in 1963).[3] Reprinted with corrections in 1967, the anthology now featured 730 poems by roughly 80 poets from Wyatt to Swinburne.[1] Despite the increased size and expense, Canadian and American poets continued to be under-represented, and modernist poets to be ignored completely. Fewer and fewer copies were sold in the 1960s, and in 1971 UofT Press dropped the title, writing off $20,000 in unsold inventory.[3] 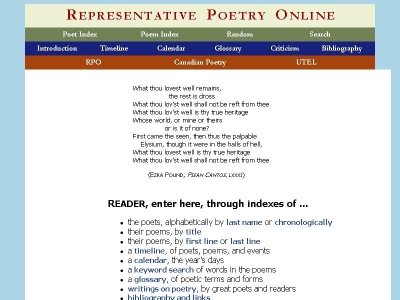 The first version of Representative Poetry Online debuted in December 1994, offering the complete 1967 selection. Version 2.0, offered in September 1996, added poems from the 1935 edition that had been dropped later. Similarly dropped poems from the 1912 and 1916 editions were added in 1997 and 1998. Ian Lancashire, who has remained editor since the beginning, has also added "several hundred poets" not in the print anthology.[1]

Between 2000 and 2002, RPO was converted from a collection of HTML files to a relational database, vastly expanding the site's search and notes capabilities. The new version, RPO edition 3.0, debuted on October 16, 2002.[1]

"Representative Poetry Online is published on a World Wide Web page of the University of Toronto English Library (UTEL), which is listed under Electronic Books in the University Library's Resources page. An early version of this encoded collection also belongs to the TACT manual published by the Modern Language Association in 1996."

"Permission is ... given to use Representative Poetry for non-commercial educational uses, that is, for teaching, research, and study, as long as copyright information is not removed from any Representative Poetry Online file, the authors of its commentaries are clearly stated, and no charge is made for use of the collection. "[1]

Retrieved from "https://pennyspoetry.fandom.com/wiki/Representative_Poetry_Online?oldid=178049"
Community content is available under CC-BY-SA unless otherwise noted.