Buchanan was born at Caverswall, Staffordshire, the son of a Scottish schoolmaster and socialist, and educated at Glasgow. He was the friend of David Gray, and with him went to London in search of fame, but had a long period of discouragement. His first work, a collection of poems, Undertones (1863), had, however, some success, and was followed by Idylls of Inverburn (1865), London Poems (1866), and others, which gave him a growing reputation, and raised high hopes of his future. Thereafter he took up prose fiction and the drama, not always with success, and got into trouble owing to some drastic criticism of his contemporaries, culminating in his famous article on the "Fleshly School of Poetry," which appeared in the Contemporary Review (October 1871), and evoked replies from Rossetti ("The Stealthy School of Criticism"), and Swinburne ("Under the Microscope"). He ultimately admitted that his criticism of Rossetti was unjustifiable. Among his novels are A Child of Nature (1879), God and the Man (1881), and among his dramas A Nine Days' Queen, A Madcap Prince, and Alone in London. His latest poems, The Outcast and The Wandering Jew, were directed against certain aspects of Christianity. Buchanan was unfortunate in his latter years; a speculation turned out ruinously; he had to sell his copyrights, and he sustained a paralytic seizure, from the effects of which he died in a few months.[1]

Buchanan was born at Caverswall, Staffordshire, on 18 August 1841, was only surviving child of Robert I. Buchanan (1813-1886) by his wife Margaret (Williams) (died 1894), daughter of a socialistic lawyer of Stoke-upon-Trent. The father, originally a tailor of Ayr, was at the time of his son's birth an itinerant lecturer in support of Robert Owen's socialist scheme, and soon took to journalism in London.[2]

Buchanan went early to schools at Hampton Wick and Merton. At home he saw and heard his father's socialist friends, who included Louis Blanc, Caussidiere, and the Chartist champion of co-operation, Lloyd Jones. His father, on principle, denied him all religious training and inculcated hostility to religion.About 1850 the family went to Glasgow, where the father for several years owned and edited the Sentinel, the Glasgow Times, and the Penny Post, journals expounding his socialistic views.[2]

After attending a preparatory school, Buchanan went successively to a Rothesay boarding-school, to Glasgow Academy, and to Glasgow high school. In 1857-1858 he completed his education by joining the junior classes of Greek and Latin at Glasgow University. An ardent devotee of the theatre, he revelled as a boy in Vandenhoff's presentation of King Lear, and made the acquaintance of various actors, among them the youthful Henry Irving, "a quiet, studious young man." A fellow-student at the university, David Gray, became a close friend, and together they read Anderson's British Poets.[2]

Owing to his father's financial embarrassments, Buchanan went to London in 1860, being presently followed by Gray, who died next year. Their experiences of hardship and Gray's brief career are vividly delineated by Buchanan in David Gray, and other essays (1868).[3] On 2 September 1861 Buchanan married Mary, daughter of Richard Jay, an engineer.[4] In 1863 novelist William Black, who was an early Glasgow friend, stayed in Buchanan's lodgings in Camden Town on coming to London (Wemyss Reid, William Black, pp. 38-41).[3]

Buchanan had already made some contributions to Glasgow newspapers. In London he obtained employment on the Athenæum and other periodicals, and formed many literary acquaintances. Dickens accepted some contributions to All the Year Round, and gave him helpful introductions to Edmund Yates and others. He sought the acquaintance of T.L. Peacock, G.H. Lewes who gave him practical advice, George Eliot, Browning, and other prominent writers. Under Peacock's influence he produced what he calls his "pseudo-classic poems," Undertones (1863) (Van Doren, Life of Peacock, 1911, pp. 164-5).[3]

After a weary and exacting struggle his work gradually won recognition. At length, in 1865, he published Idyls and Legends of Inverburn, which strongly appealed to Alexander Strahan the publisher and Roden Noel, thenceforth 2 valued friends. His London Poems (1866) established his reputation as a graphic writer of narrative poetry whose sympathies with humble life were deep.[3]

With improved prospects, Buchanan settled near Oban, 1866 to 1874, living as a country gentleman and writing steadily, both verse (chiefly narrative) and prose sketches and criticisms. Ballad Stories of the Affections (translated from Danish) appeared in 1866; North Coast, and other Poems in 1867; The Book of Orm, a mystical study, in 1870; 'Napoleon Fallen,' a lyrical drama (2 editions) and The Drama of Kings in 1871, St. Abe and his Seven Wives, a tale in verse of Salt Lake City (anonymously), in 1872; and White Rose and Red, a love story in verse, in 1873.[3]

Vivacious ballads like "The Starling" (in London Poems), "Phil Blood's Leap" and the "Wedding of Shon McLean" (in Ballads of Life, Love, and Humour, 1882) powerfully impressed the general reader. The "Wedding" originally appeared in the Gentleman's Magazine, July 1874.[3]

In prose his best efforts of this period were The Land of Lome, vivid sketches of a yachting tour to the Hebrides (1871), and critical essays on contemporary authors collected from magazines entitled Master Spirits (1874). The poet soon outran his income, and in order to retrieve his position he gave at the rooms in Hanover Square, London, in 1869, 2 readings from his works; but the physical strain prevented him from continuing them.[3]

In the Spectator on 15 September 1866 Buchanan had published under the pseudonym "Caliban" a poem called The Session of the Poets, in which he wrote insolently of Swinburne, and satirically of other leading poets of the day. In a pamphlet on Swinburne's Poems and Ballads (1867), W. M. Rossetti retorted by calling Buchanan "a poor but pretentious poetaster." Reviewing Matthew Arnold's New Poems (1867) Swinburne attacked David Gray's "poor little book" in a merciless foot-note (Essays and Studies p. 153).[3]

Buchanan now retaliated with vehemence. In October 1871 Buchanan under the pseudonym of Thomas Maitland contributed to the Contemporary Review an article entitled "The Fleshly School of Poetry," severely handling the Pre-Raphaelites and especially Dante Gabriel Rossetti. A bitter controversy followed (Rossetti's Family Letters, ii. 249) Rossetti protested in the Athenæum against "The Stealthy School of Criticism" (16 Dec. 1871), while Swinburne, with biting causticity, denounced Buchanan in "Under the Microscope" (1872).[3]

Having revvised and amplified his attack, Buchanan in 1872 issued it as a pamphlet with his name and the title 'The Fleshly School of Poetry and other Phenomena of the Day.' The warfare was long continued. Swinburne, under the mocking signature of "Thomas Maitland St. Kilda," renewed his attack on Buchanan in a letter entitled "The Devil's Due," published in the Examiner on 28 December 1875. Buchanan brought an action for libel against the newspaper's proprietor, Peter Taylor, and after 3 days' trial (29 June-1 July 1876) won L50Z. damages.[3]

Subsequently Buchanan acknowledged the extravagance of his assault, and sought to make reparation by dedicating to his "old enemy," i.e. Rossetti, his novel God and the Man (1881). He wrote in the Academy on 1 July 1882, "Mr. Rossetti, I freely admit now, never was a Fleshly Poet at all," and he eulogised Rossetti's work in A Look round Literature (1887).[3]

Leaving Oban in 1874, Buchanan in search of health settled at Rossport, co. Mayo. A collection of his poems in 3 volumes appeared that year, and although it was censured for its irregularities, improved his position. Balder the Beautiful, an ambitious but heavy poem, followed in 1877, and was received with indifference.[3]

Meanwhile, Buchanan turned to prose fiction. In 1876 came out his first novel, The Shadow of the Sword (new edition 1902), which proved thoroughly readable, and was the forerunner of a long series, 2 of which, A Child of Nature (1881) and Father Anthony (not issued till 1898), were coloured by his Irish experience. [3]

Wearying of Irish life after 1877, Buchanan presently settled in London, which thenceforth remained his headquarters. His literary activity was now at its height. His most powerful novel, God and the Man, a vivid study of a family feud, appeared in 1881, and hardly a year passed till near his death without the issue of a new book of fiction from his pen.[3]

He did not abandon poetry, but published less. For the opening of the Glasgow International Exhibition in May 1888 he composed a patriotic ode, which was set to music by Sir Alexander Mackenzie. The City of Dream, an epic poem (1888), the chief poem of his latter years, illustrates his mystical vein and love of mythology.[3]

While a boy at Glasgow Buchanan wrote a fairly successful pantomime, and comparatively early in his literary career he thought of writing for the stage. After some preliminary trials he wrote and produced successfully at the Connaught Theatre, London, in 1880 a drama called A Nine Days' Queen. From that time till 1897 he was independently or conjointly responsible for a long series of plays, which showed theatrical skill and won the public ear.[4]

He also engaged in theatrical management from time to time. He dramatised his 2 novels, The Shadow of the Sword in 1881, and God and the Man (with the title Stormbeaten) in 1883, the latter venture proving profitable. In 1883 he became lessee of the Globe Theatre for the purpose of producing Lady Clare, his version of Georges Ohnet's Le Maitre de Forges. He secured a run of over 100 nights.[4]

In 1884 he visited America, and there staged in Philadelphia the melodrama Alone in London, a composite work by himself and his sister-in-law, Harriett Jay, which was triumphantly produced at the Olympic Theatre in London in 1885. Two plays, Sophia (1886) and Joseph's Sweetheart (1888), which were produced by Thomas Thorne and his company at the Vaudeville Theatre, were based respectively on Fielding's Tom Jones and Joseph Andrews. An adaptation of Roger La Honte, entitled A Man's Shadow, was very popular at the Haymarket Theatre, 1889-1890, with (Sir) Herbert Beerbohm Tree in the chief character.[4]

In co-operation with Mr. G.R. Sims he wrote for the Adelphi, during 1890-3, a series of melodramas, including The English Rose, The Trumpet Call, The White Rose, The Lights of Home, and The Black Domino. Meanwhile Buchanan's Clarissa Harlowe and Miss Tomboy (adapted from Vanbrugh's Relapse) both appeared at the Vaudeville in 1890, Winifred Emery being heroine in each. In the same year The Bride of Love, a rendering of the story of Cupid and Psyche, was produced at the Adelphi. During the same season Buchanan leased the Lyric Theatre, where he brought out Sweet Nancy, a dramatic version of Miss Rhoda Broughton's novel Nancy. On Dostoievski's Crime and Punishment he based The Sixth Commandment (1890). The Charlatan (1894) was one of his later successes, with (Sir) Herbert Beerbohm Tree as chief exponent. There followed in 1895 The Strange Adventures of Miss Brown. His last dramatic experiment was Two Little Maids from School, adapted from Les Demoiselles de St. Cyr (1898).[4]

His wife died without issue after a long illness in November 1882. Just after her death Buchanan wrote a touching dedication to her for his Selected Poems (1882). In his latter years he depended largely on the care of his sister-in-law, Miss Harriett Jay, who aided him in his dramatic work both as actress and as collaborator in authorship and management.[4]

Although his literary and dramatic profits were substantial, Buchanan, who was generous in his gifts to less successful writers, was always improvident, and he lost late in life all his fortune in disastrous speculation. In 1900 he was made bankrupt. An attack of paralysis disabled him late in that year, and he died in poverty at Streatham on 10 June 1901, being buried at Southend-on-Sea, Essex.[4]

Buchanan wrote too much and too variously to achieve the highest results, but his lyric gift was strong, and there was abundant, if often ill-regulated, force in his novels and plays. He was loyal through life to the anti-religious tradition in which he was bred. In criticism his polemical spirit distorted his judgment, and his combative temperament precluded his making many friends. But with a few men, including Charles Reade, Roden Noel, and Mr. William Canton, his good relations were uninterrupted, and his work found a warm admirer in Mr. Lecky.[4] 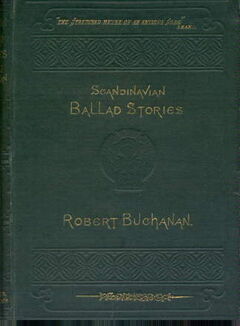 Retrieved from "https://pennyspoetry.fandom.com/wiki/Robert_Buchanan?oldid=188741"
Community content is available under CC-BY-SA unless otherwise noted.