Start a Wiki
This article is about the 20th-century Canadian poet. For the 19th-century English poet, see Robert Anderson (poet).

Anderson workedat at various times as a journalist, a soldier, and a fire-fighter.[1]

During his 20s he lived in Lemon Creek, in the Kootenay Mountains of British Columbia, where he contributed verse to the local papers and was known as the "Kipling of the Kootenays".[2]

He later moved to Edmonton, Alberta, and became a fireman. After serving in World War I, he lived in Alberta the rest of his life.[2] 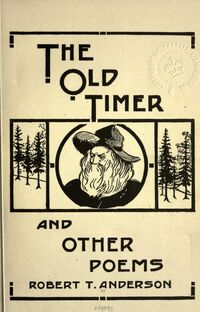 Except where noted, bibliographical information courtesy University of Toronto.[1]

Retrieved from "https://pennyspoetry.fandom.com/wiki/Robert_T._Anderson?oldid=218346"
Community content is available under CC-BY-SA unless otherwise noted.