Shakespeare's Sonnets is a collection of 154 poems in sonnet form written by William Shakespeare, dealing with themes such as the passage of time, love, beauty and mortality.

All but 2 of the poems were 1st published in a 1609 quarto entitled Shake-speares Sonnets: Never before imprinted. Sonnets 138 and 144 had previously been published in a 1599 miscellany entitled The Passionate Pilgrim. The quarto also includes "A Lover's Complaint", a narrative poem of 47 seven-line stanzas written in rhyme royal.

The publisher, Thomas Thorpe, entered the book in the Stationers' Register on 20 May 1609:

Tho. Thorpe. Entred for his copie under the handes of master Wilson and master Lownes Wardenes a booke called Shakespeares sonnettes vjd.

Whether Thorpe used an authorized manuscript from Shakespeare or an unauthorized copy is unknown. George Eld printed the quarto, and the run was divided between the booksellers William Aspley and John Wright.

The first 17 sonnets, traditionally called the procreation sonnets, are ostensibly written to a young man urging him to marry and have children in order to immortalise his beauty by passing it to the next generation.[1] Other sonnets express the speaker's love for a young man; brood upon loneliness, death, and the transience of life; seem to criticise the young man for preferring a rival poet; express ambiguous feelings for the speaker's mistress; and pun on the poet's name. The final 2 sonnets are allegorical treatments of Greek epigrams referring to the "little love-god" Cupid.

The sonnets are almost all constructed from three four-line stanzas (called quatrains) and a final couplet composed in iambic pentameter[2] (a meter used extensively in Shakespeare's plays) with the rhyme scheme abab cdcd efef gg (this form is now known as the Shakespearean sonnet).

The only exceptions are Sonnets 99, 126, and 145. Number 99 has fifteen lines. Number 126 consists of six couplets, and 2 blank lines marked with italic brackets. 145 is in iambic tetrameter, not pentameter. Often, the beginning of the third quatrain marks the volta ("turn"), or the line in which the mood of the poem shifts, and the poet expresses a revelation or epiphany.

There is another variation on the standard English structure, found for example in sonnet 29. The normal rhyme scheme is changed by repeating the b of quatrain one in quatrain three where the f should be. This leaves the sonnet distinct between both Shakespearean and Spenserian styles.

Whether the author intended to step over the boundaries of the standard rhyme scheme will always be in question. Some, like Sir Denis Bray, find the repetition of the words and rhymes to be a "serious technical blemish",[3] while others, like Kenneth Muir, think "the double use of 'state' as a rhyme may be justified, in order to bring out the stark contrast between the Poet's apparently outcast state and the state of joy described in the third quatrain."[4] Given that this is the only sonnet in the collection that follows this pattern, it is hard to say if it was purposely done. But most of the poets at the time were well educated; "schooled to be sensitive to variations in sounds and word order that strike us today as remarkably, perhaps even excessively, subtle." [5] Shakespeare must have been well aware of this subtle change to the firm structure of the English sonnets.

One interpretation is that Shakespeare's sonnets are in part a pastiche or parody of the three-centuries-old tradition of Petrarchan love sonnets; Shakespeare consciously inverts conventional gender roles as delineated in Petrarchan sonnets to create a more complex and potentially troubling depiction of human love.[6] He also violated many sonnet rules, which had been strictly obeyed by his fellow poets: he plays with gender roles (20), he speaks on human evils that do not have to do with love (66), he comments on political events (124), he makes fun of love (128), he speaks openly about sex (129), he parodies beauty (130), and even introduces witty pornography (151).

When analyzed as characters, the subjects of the sonnets are usually referred to as the Fair Youth, the Rival Poet, and the Dark Lady. Some scholars claim that the speaker expresses admiration for the Fair Youth's beauty, and later has an affair with the Dark Lady,(Citation needed) while others claim a homosexual attraction or relationship between the speaker of the sonnets and the Fair Youth. It is not known whether the poems and their characters are fiction or autobiographical; scholars who find the sonnets to be autobiographical, notably A. L. Rowse, have attempted to identify the characters with historical individuals.[7]

"Fair Youth" refers to the unnamed young man to whom sonnets 1-126 are addressed.[8] Some commentators, noting the romantic and loving language used in this sequence of sonnets, have suggested a homosexual relationship between them; others have read this relationship as platonic love, or the love of a father for his son.

The earliest poems in the collection do not imply a close personal relationship; instead, they recommend the benefits of marriage and children. With the famous sonnet 18 ("Shall I compare thee to a summer's day") the tone changes dramatically towards romantic intimacy. Sonnet 20 explicitly laments that the young man is not a woman. Most of the subsequent sonnets describe the ups and downs of the relationship, culminating with an affair between the poet and the Dark Lady. The relationship seems to end when the Fair Youth succumbs to the Lady's charms.(Citation needed)

There have been many attempts to identify the young man. Shakespeare's one-time patron, Henry Wriothesley, 3rd Earl of Southampton is commonly suggested, although Shakespeare's later patron, William Herbert, 3rd Earl of Pembroke, has recently become popular.[9] Both claims begin with the dedication of the sonnets to 'Mr. W.H.', "the only begetter of these ensuing sonnets"; the initials could apply to either earl. However, while Shakespeare's language often seems to imply that the subject is of higher social status than himself, the apparent references to the poet's inferiority may simply be part of the rhetoric of romantic submission.(Citation needed) An alternative theory, most famously espoused by Oscar Wilde's short story 'The Portrait of Mr. W.H.' notes a series of puns that may suggest the sonnets are written to a boy actor called William Hughes; however, Wilde's story acknowledges that there is no evidence for such a person's existence. Samuel Butler believed that the friend was a seaman. Joseph Pequigney argued in his book Such Is My Love that the Fair Youth was an unknown commoner.

The Dark Lady sequence (sonnets 127–152), distinguishes itself from the Fair Youth sequence by being overtly sexual in its passion. Among these, Sonnet 151 has been characterized as "bawdy" and is used to illustrate the difference between the spiritual love for the Fair Youth and the sexual love for the Dark Lady.[10] The distinction is commonly made in the introduction to modern editions of the sonnets.[10] The Dark Lady is so called because the poems make it clear that she has black hair and dusky skin. As with the Fair Youth, there have been many attempts to identify her with a real historical individual. Mary Fitton, Emilia Lanier and others have been suggested.

William Wordsworth was unimpressed by these sonnets. He wrote that:

These sonnets, beginning at 127, to his Mistress, are worse than a puzzle-peg. They are abominably harsh, obscure & worthless. The others are for the most part much better, have many fine lines, very fine lines & passages. They are also in many places warm with passion. Their chief faults, and heavy ones they are, are sameness, tediousness, quaintness, & elaborate obscurity.

The Rival Poet's identity has always remained a mystery; among the varied candidates are Christopher Marlowe, George Chapman, or, an amalgamation of several contemporaries.[11] However, there is no hard evidence that the character had a real-life counterpart. The speaker sees the Rival as competition for fame, coin and patronage. The sonnets most commonly identified as the Rival Poet group exist within the Fair Youth sequence in sonnets 78–86.[11]

The sonnets include a dedication to one "Mr. W.H.". The identity of this person remains a mystery and has provoked a great deal of speculation. The dedication reads: 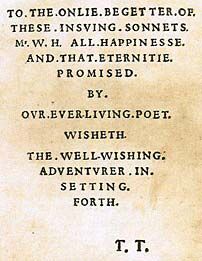 Given the obscurity of its referents, since the 19th century the dedication has become (in Colin Burrow's words) a "dank pit in which speculation wallows and founders". Don Foster concludes that the result of all the speculation has yielded only 2 "facts," which themselves have been the object of much debate: First, that the form of address (Mr.) suggests that W.H. was an untitled gentleman, and second, that W.H., whoever he was, is identified as "the only begetter" of Shakespeare's Sonnets (whatever the word "begetter" is taken to mean).[12]

The initials 'T.T.' are taken to refer to the publisher, Thomas Thorpe, though Thorpe usually signed prefatory matter only if the author was out of the country or dead.[13] Foster points out, however, that Thorpe's entire corpus of such consists of only four dedications and three stationer's prefaces.[14] That Thorpe signed the dedication rather than the author is often read as evidence that he published the work without obtaining Shakespeare's permission.[15]

The capital letters and periods following each word were probably intended to resemble an ancient Roman lapidary inscription or monumental brass, thereby accentuating Shakespeare's declaration in Sonnet 55 that the work will confer immortality to the subjects of the work:[16]

Not marble, nor the gilded monuments
Of princes shall outlive this pow'rful rhyme,

126 of Shakespeare's sonnets are addressed to a young man, often called the "Fair Youth." Broadly speaking, there are 2 branches of theories concerning the identity of Mr. W.H.: those that take him to be identical to the youth, and those that assert him to be a separate person.

Coming as they do at the end of conventional Petrarchan sonneteering , Shakespeare's sonnets can also be seen as a prototype, or even the beginning, of a new kind of "modern" love poetry. During the 18th century, their reputation in England was relatively low; as late as 1805, The Critical Review could still credit John Milton with the perfection of the English sonnet. As part of the renewed interest in Shakespeare's original work that accompanied Romanticism, the sonnets rose steadily in reputation during the 19th century.[27] As late as 1911, though, the Encyclopædia Britannica Eleventh Edition was dismissing them as sonnets, insisting they were really quatorzains.

The cross-cultural importance and influence of the sonnets is demonstrated by the large number of translations that have been made of them. In the German-speaking countries alone, there have been 70 complete translations since 1784. There is no major written language into which the sonnets have not been translated, including Latin,[28], Japanese, [29]Turkish,[30]Esperanto,[31] and Klingon.[32]

Like all of Shakespeare's work, the sonnets have been reprinted in many editions.

Retrieved from "https://pennyspoetry.fandom.com/wiki/Shakespeare%27s_Sonnets?oldid=225478"
Community content is available under CC-BY-SA unless otherwise noted.