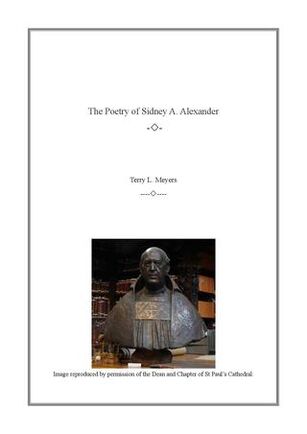 The son of a bank clerk, Alexander was educated at St Paul's School (London). He then attended Trinity College, Oxford, where he earned a B.A. in 1889 with a number of distinctions and prizes. While at St. Paul’s (the start of a lifetime affiliation with the Cathedral), he won recognition for his poetry.

Alexander built on his academic success in verse by placing a number of poems in some of the leading Victorian periodicals, The Academy, English Illustrated Magazine, Macmillan's Magazine, Cassell's Magazine, and others; several of his poems were reprinted in America. But Alexander’s career became that of a clergyman, distinguished to some extent by his religious essays and books but more by his efforts to safeguard the fabric of St. Paul’s Cathedral, where he became a Canon in 1909 and where his responsibilities encompassed those of Treasurer. Alexander had been ordained to a curacy at St. Michael's Church, Oxford and was a lecturer and tutor at Keble College, Oxford until his appointment in 1893 as Reader of the Temple, followed by appointments as Canon of Gloucester and head of the Gloucester College of Mission Clergy.

Alexander’s books include "Christ and Scepticism" (1894), The Christianity of St. Paul (1899) and Progressive Revelation (1910), works which have been described as the product “of a mind well versed in philosophy and theology.” In these as well as his sermons and elsewhere he was someone “who knew his own mind.” He had a special sympathy for the unfortunates of society and served on the Central (Unemployed) Body for London and, during World War I, on the Mansion House War Relief Committee.

Alexander’s work, especially his fundraising, on behalf of St. Paul’s was noteworthy. He agitated from early in his canonical career for the structural and financial needs of the cathedral, articulating and responding to environmental threats to the very fabric of the building, built on shallow foundations above treacherous sand ("We must have wet sand!" cried Canon Alexander fervently [in 1930]. "We must have wet sand!"). His dedication to the central role of the cathedral in the faith of England is clear in his lectures and publications about St. Paul’s, including The Safety of St. Paul’s (1927), and about its architect, Christopher Wren. Alexander’s strengthening and protecting the structure of the Cathedral helped it survive the German bombings of World War II, as was recognized by the Archbishop of Canterbury in 1944. Even before the war he had been awarded several honors.

Alexander’s prize-winning poem Sakya-Muni: The story of Buddha (1887) was generally well received in the Oxford Magazine (“sustained melody and grace….certain higher touches of imagination and expression which give to the simple and quiet style an air of finish and distinction”). A modern literary historian sets the poem in the Victorian context of “a trend of swelling interest in the West in Buddhism.”

As a student at Oxford, Alexander won the Milton Prize for his poem “Caedmon” in 1882, and the Newdigate Prize for "Sakya-Muni: The story of Buddha" in 1887.

Retrieved from "https://pennyspoetry.fandom.com/wiki/Sidney_A._Alexander?oldid=227765"
Community content is available under CC-BY-SA unless otherwise noted.