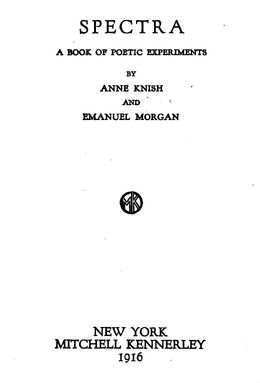 Spectra: A Book of Poetic Experiments was a small volume of poetry published in 1916 by American writers Witter Bynner, who wrote under the pseudonym "Emanuel Morgan", and Arthur Davison Ficke, who wrote as "Anne Knish."

Spectra was preceded by a Preface, by Anne Knish, that served as a brief manifesto outlining the Spectric method as a school:

With this vague program, the two poets adopted personas for their namesakes. The poems in the collection were not given titles, merely opus numbers. "Emanuel Morgan" was a rhyming Whitman, full of bacchanalian, bardic blatherskite. From "Opus 6:"

If I were only dafter
I might be making hymns
To the liquor of your laughter
And the lacquer of your limbs.

"Anne Knish" was the archetypal poetess, full of oracular ipse dixits, sensual, enigmatic, and vaguely scandalous. In 1916, most Americans were unfamiliar with Eastern European cooking and had never heard of knishes; the pseudonym was intended to be exotic and slightly oriental. Here is Knish's "Opus 118":

If bathing were a virtue, not a lust
I would be dirtiest.

To some, housecleaning is a holy rite.
For myself, houses would be empty
But for the golden motes dancing in sunbeams.

Tax-assessors frequently overlook valuables.
Today they noted my jade.
But my memory of you escaped them.

Spectra was meant to be the starting-point of a hoax of exposure, after the manner of the Taxil hoax or, more recently, the Sokal Affair. Bynner and Ficke were old-school poets who had grown weary of the isms and free-form experiments such as Imagism that had displaced more traditional varieties of poetic practice. They meant the Spectra poems to mock the pretensions of these several schools, and tried to make them bad. The plan seemed to work; a number of American writers, including Edgar Lee Masters and William Carlos Williams, were entirely taken in by the hoax.

The Spectra poems are probably the most widely remembered work of either Bynner or Ficke. Much of their later verse in a more serious vein was influenced by their own experiments in Spectra.

Retrieved from "https://pennyspoetry.fandom.com/wiki/Spectra_(book)?oldid=146370"
Community content is available under CC-BY-SA unless otherwise noted.