The Faerie Queene is an incomplete English epic poem by Edmund Spenser.

The Faerie Queene found political favour with Elizabeth I and was consequently a success, to the extent that it became Spenser's defining work. The poem found such favour with the monarch that Spenser was granted a pension for life amounting to 50 pounds a year, though there is no evidence that Elizabeth I read any of the poem.[1] 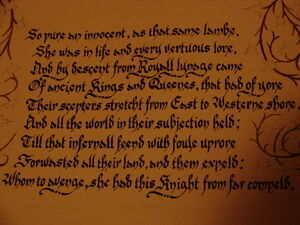 The Faerie Queene is notable for its form: it was the first work written in Spenserian stanza, and is one of the longest poems in the English language.[2] It is an allegorical work, written in praise of Queen Elizabeth I. In a completely allegorical context, the poem follows several knights in an examination of several virtues. In Spenser's "A Letter of the Authors," he states that the entire epic poem is "cloudily enwrapped in allegorical devises," and that the aim of publishing The Faerie Queene was to "fashion a gentleman or noble person in virtuous and gentle discipline."

A Celebration of the VirtuesEdit

A letter written by Spenser to Sir Walter Raleigh in 1589 contains a preface for The Faerie Queene, in which Spenser describes the allegorical presentation of virtues through Arthurian knights in the mythical "Faerieland". Presented as a preface to the epic in most published editions, this letter outlines plans for 24 books: 12 based each on a different knight who exemplified one of 12 "private virtues", and a possible 12 more centered on King Arthur displaying twelve "public virtues". Spenser names Aristotle as his source for these virtues, although the influence of Thomas Aquinas can be observed as well. It is impossible to predict what the work would have looked like had Spenser lived to complete it, since the reliability of the predictions made in his letter to Raleigh is not absolute, as numerous divergences from that scheme emerged as early as 1590, in the first Faerie Queene publication.

As it was published in 1596, the epic presented the following virtues:

In addition to these six virtues, the Letter to Raleigh suggests that Arthur represents the virtue of Magnificence, which ("according to Aristotle and the rest") is "the perfection of all the rest, and conteineth in it them all"; and that the Faerie Queene herself represents Glory (hence her name, Gloriana). The unfinished seventh book (the Cantos of Mutability), appears to have represented the virtue of "constancy."

The poem celebrates, memorializes, and critiques the Tudor dynasty (of which Elizabeth was a part), much in the way that Virgil's Aeneid celebration of Augustus Caesar's Rome. Like the Aeneid, which states that Augustus descended from the noble sons of Troy, The Faerie Queene suggests that the Tudor lineage can be connected to King Arthur. The poem is deeply allegorical and allusive: many prominent Elizabethans could have seen themselves or others partially represented by 1 or more of Spenser's figures.

Elizabeth herself is the most prominent example: she appears most prominently in her guise as Gloriana, the Faerie Queene herself; but also in Books III and IV as the virgin Belphoebe, daughter of Chrysogonee and twin to Amoret, the embodiment of womanly married love; and perhaps also, more critically, in Book I as Lucifera, the "maiden queen" whose brightly-lit Court of Pride masks a dungeon full of prisoners.

The poem also displays Spenser's thorough familiarity with literary history. Although the world of The Faerie Queene is based on English Arthurian legend, much of the language, spirit, and style of the piece draw more on Italian epic, particularly Ludovico Ariosto's Orlando Furioso and Torquato Tasso's Jerusalem Delivered.[3] The 5h Book of The Faerie Queene, the Book of Justice, is Spenser's most direct discussion of political theory. In it, Spenser both attempts to tackle the problem of policy toward Ireland and recreates the trial of Mary, Queen of Scots.

Spenser's language in The Faerie Queene, as in The Shepheardes Calender, is deliberately archaic, though the extent of this has been exaggerated by critics who follow Ben Jonson's dictum, that "in affecting the ancients Spenser writ no language."[4] Allowing that Jonson's remark may only apply to the Calendar, Bruce Robert McElderry, Jr., states, after a detailed investigation of the FQTemplate:'s diction, that Jonson's statement "is a skillful epigram; but it seriously misrepresents the truth if taken at anything like its face value."[5] The number of archaisms used in the poem are not overwhelming - ”one source reports thirty-four in Canto One of Book One, that is, thirty-four words out of a total 4,200 words, less than one percent.[6] According to McElderry, language does not account for the poem's archaic tone: "The subject-matter of The Faerie Queene is itself the most powerful factor in creating the impression of archaism."[7]

Examples of medieval archaisms (in morphology and diction) include:

Samuel Johnson also commented critically on Spenser's diction, with which he became intimately acquainted during his work on A Dictionary of the English Language, and "found it a useful source for obsolete and archaic words"; Johnson, however, mainly considered Spenser's (early) pastoral poems, a genre of which he was not particularly fond.[9]

The diction and atmosphere of The Faerie Queene relied on much more than just Middle English; for instance, classical allusions and classical proper names abound - especially in the later books - and he coined some names based on Greek, such as "Poris" and "Phao lilly white."[10] Classical material is also alluded to or reworked by Spenser, such as the rape of Lucretia, which was reworked into the story of the character Amavia in Book Two.[11]

The Faerie Queene owes, in part, its central figure, Arthur, to a medieval writer, Geoffrey of Monmouth. In his Prophetiae Merlini ("Prophecies of Merlin"), Geoffrey's Merlin proclaims that the Saxons will rule over the Britons until the "Boar of Cornwall" (Arthur) again restores them to their rightful place as rulers.[12] The prophecy was adopted by the British people and eventually used by the Tudors. Through their ancestor, Owen Tudor, the Tudors had Welsh blood, through which they claimed to be descendants of Arthur and rightful rulers of Britain.[13] The tradition begun by Geoffrey of Monmouth set the perfect atmosphere for Spenser's choice of Arthur as the central figure and natural bridegroom of Gloriana.

Retrieved from "https://pennyspoetry.fandom.com/wiki/The_Faerie_Queene?oldid=220901"
Community content is available under CC-BY-SA unless otherwise noted.