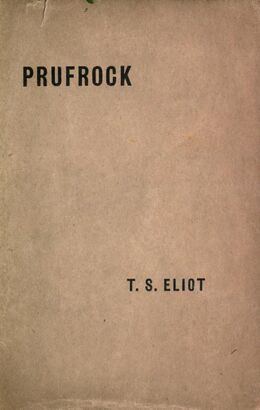 "The Love Song of J. Alfred Prufrock", commonly known as "Prufrock", is a poem by T.S. Eliot, begun in February 1910 and published in Chicago in June 1915. Described as a "drama of literary anguish," it presents a stream of consciousness in the form of a dramatic monologue, and marked the beginning of Eliot's career as an influential poet. With its weariness, regret, embarrassment, longing, emasculation, sexual frustration, sense of decay, and awareness of mortality, Prufrock has become one of the most recognized voices in modern literature,[1] and is the quintessential urban zeitgeist of the 20th century.(Citation needed)

In the room the women come and go
Talking of Michelangelo.

No! I am not Prince Hamlet, nor was meant to be;
Am an attendant lord, one that will do
To swell a progress, start a scene or two,
Advise the prince; no doubt, an easy tool,
Deferential, glad to be of use,         115
Politic, cautious, and meticulous;
Full of high sentence, but a bit obtuse;
At times, indeed, almost ridiculous —
Almost, at times, the Fool.

Shall I part my hair behind? Do I dare to eat a peach?
I shall wear white flannel trousers, and walk upon the beach.
I have heard the mermaids singing, each to each.

I have seen them riding seaward on the waves
Combing the white hair of the waves blown back
When the wind blows the water white and black.

Composed mainly between February 1910 and July or August 1911, the poem was first published in Chicago in the June 1915 issue of Poetry: A Magazine of Verse ,[2] after Ezra Pound, the magazine's foreign editor, persuaded Harriet Monroe, its founder, that Eliot was unique: "He has actually trained himself AND modernized himself ON HIS OWN. The rest of the promising young have done one or the other, but never both."[3] This was Eliot's first publication of a poem outside school or university.

In November 1915 , the poem—along with Eliot's "Portrait of a Lady," "The Boston Evening Transcript," "Hysteria," and "Miss Helen Slingsby"—was published in London in Ezra Pound's Catholic Anthology 1914–1915, which was printed by Elkin Mathews.[4] In June 1917, The Egoist, a small publishing firm run by Dora Marsden, published a pamphlet entitled Prufrock and Other Observations (London), containing twelve poems by Eliot. "The Love Song of J. Alfred Prufrock" was the first in the volume.

Eliot's notebook of draft poems, published posthumously in 1996 by Harcourt Brace, includes 38 lines from the middle of a draft version of the poem. This section, now known as Prufrock's Pervigilium, describes the "vigil" of Prufrock through an evening and night.[5]

The Harvard Vocarium at Harvard College recorded Eliot's reading of Prufrock and other poems in 1947, as part of their ongoing series of poetry readings by their authors.[6]

In the drafts, the poem had the subtitle Prufrock among the Women.[7] Eliot said "The Love Song of" portion of the title came from "The Love Song of Har Dyal," a poem by Rudyard Kipling.[8] The form of Prufrock's name is like the name that Eliot was using at the time: T. Stearns Eliot.[9]

On the origin of the name "Prufrock", there was a "Prufrock-Littau Company" in St Louis at the time Eliot lived there, a furniture store. In a 1950 letter, Eliot said, "I did not have, at the time of writing the poem, and have not yet recovered, any recollection of having acquired this name in any way, but I think that it must be assumed that I did, and that the memory has been obliterated."[10] It has also been suggested that Prufrock comes from the German word "Prüfstein" meaning "touchstone" (cognate to proof-stone, with stone changed to rock).[11]

In context, the epigraph refers to a meeting between Dante and Guido da Montefeltro, who was condemned to the eighth circle of Hell for providing counsel to Pope Boniface VIII, who wished to use Guido's advice for a nefarious undertaking. This encounter follows Dante's meeting with Ulysses, who himself is also condemned to the circle of the Fraudulent. According to Ron Banerjee, the epigraph serves to cast ironic light on Prufrock's intent. Like Guido, Prufrock had intended his story never be told, and so by quoting Guido, Eliot reveals his view of Prufrock's love song.[12]

Frederick Locke contends that Prufrock himself is suffering from multiple personalities of sorts, and that he embodies both Guido and Dante in the Inferno analogy. One is the storyteller; the other the listener who later reveals the story to the world. He posits, alternatively, that the role of Guido in the analogy is indeed filled by Prufrock, but that the role of Dante is filled by you, the reader, as in "Let us go then, you and I," (1). In that, the reader is granted the power to do as he pleases with Prufrock's love song.[13]

Although he finally chose not to use it, the draft version of the epigraph for the poem came from Dante's Purgatorio (XXVI, 147-148):[14]

Eliot provided this translation in his essay "Dante" (1929):

'be mindful in due time of my pain'.
Then dived he back into that fire which refines them.

He would eventually use the quotation in the closing lines of his 1925 poem The Waste Land. The quotation that Eliot did choose comes from Dante also. Inferno (XXVII, 61-66) reads:

One translation, from the Princeton Dante Project, is:

"If I thought my answer were given
to anyone who would ever return to the world,
this flame would stand still without moving any further.
But since never from this abyss
has anyone ever returned alive, if what I hear is true,
without fear of infamy I answer you."[15]

Because the poem is concerned primarily with the irregular musings of the narrator, it can be difficult to interpret. Laurence Perrine wrote, "[the poem] presents the apparently random thoughts going through a person's head within a certain time interval, in which the transitional links are psychological rather than logical".[16] This stylistic choice makes it difficult to determine exactly what is literal and what is symbolic. On the surface, "The Love Song of J. Alfred Prufrock" relays the thoughts of a sexually frustrated middle-aged man who wants to say something but is afraid to do so, and ultimately does not.[16][17] The dispute, however, lies in to whom Prufrock is speaking, whether he is actually going anywhere, what he wants to say, and to what the various images refer.

The intended audience is not evident. Some believe that Prufrock is talking to another person[18] or directly to the reader,[19] while others believe Prufrock's monologue is internal. Perrine writes "The 'you and I' of the first line are divided parts of Prufrock's own nature",[16] while Mutlu Konuk Blasing suggests that the "you and I" refers to the relationship between the dilemmas of the character and the author.[20] Similarly, critics dispute whether Prufrock is going somewhere during the course of the poem. In the first half of the poem, Prufrock uses various outdoor images (the sky, streets, cheap restaurants and hotels, fog), and talks about how there will be time for various things before "the taking of toast and tea", and "time to turn back and descend the stair." This has led many to believe that Prufrock is on his way to an afternoon tea, in which he is preparing to ask this "overwhelming question".[16] Others, however, believe that Prufrock is not physically going anywhere, but rather, is playing through it in his mind.[19][20]

Perhaps the most significant dispute lies over the "overwhelming question" that Prufrock is trying to ask. Many believe that Prufrock is trying to tell a woman of his romantic interest in her,[16] pointing to the various images of women's arms and clothing and the final few lines in which Prufrock laments that the mermaids will not sing to him. Others, however, believe that Prufrock is trying to express some deeper philosophical insight or disillusionment with society, but fears rejection, pointing to statements that express a disillusionment with society such as "I have measured out my life with coffee spoons" (line 51). Many believe that the poem is a criticism of Edwardian society and Prufrock's dilemma represents the inability to live a meaningful existence in the modern world.[21] McCoy and Harlan wrote "For many readers in the 1920s, Prufrock seemed to epitomize the frustration and impotence of the modern individual. He seemed to represent thwarted desires and modern disillusionment."[19]

As the poem uses the stream of consciousness technique, it is often difficult to determine what is meant to be interpreted literally or symbolically. In general, Eliot uses imagery which is indicative of Prufrock's character,[16] representing aging and decay. For example, "When the evening is spread out against the sky / Like a patient etherized upon a table" (lines 2-3), the "sawdust restaurants" and "cheap hotels," the yellow fog, and the afternoon "Asleep...tired... or it malingers" (line 77), are reminiscent of languor and decay, while Prufrock's various concerns about his hair and teeth, as well as the mermaids "Combing the white hair of the waves blown back / When the wind blows the water white and black," show his concern over aging.

John C. Pope has postulated that Eliot's J. Alfred Prufrock is connected to Fyodor Dostoyevsky's Raskolnikov of Crime and Punishment. While Dostoyevsky "caught the undercurrent of stifled suffering" in the "withering life of cities", Pope suggests that Prufrock is a victim of "stifled suffering," while the "withering life of cities" is more referential to the slow demise of fashionable society.[22][23]

Use of allusion Edit

Like many of Eliot's poems, "The Love Song of J. Alfred Prufrock" makes numerous allusions to other works, which are often symbolic themselves.[16] Laurence Perrine identifies the following allusions in the poem:

Retrieved from "https://pennyspoetry.fandom.com/wiki/The_Love_Song_of_J._Alfred_Prufrock?oldid=143081"
Community content is available under CC-BY-SA unless otherwise noted.