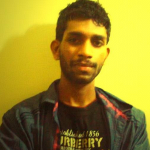 Nithin purple is an Indian born freelance poet, writing poems and quotes in English language, Hailing from Kerala also called Gods own country, He is an aggressive poet makes himself a visionary through a long, boundless, and systematized disorganization of all the senses. All forms of love, of suffering, of madness; he searches himself, he exhausts within himself all poisons, and preserves their quintessences. Unspeakable torment, where he will need the greatest faith, a superhuman strength, where he becomes all men: the great invalid, the great criminal, the great accursed—and the Supreme Scientist! For he attains the unknown! Because he has cultivated his soul, already rich, more than anyone! He attains the unknown, and, if demented, he finally loses the understanding of his visions, he will at least have seen them! So what if he is destroyed in his ecstatic flight through things unheard of, unnameable: other horrible workers will come; will begin at the horizons where the first one has fallen!, His major influential writers are:, John Milton, John Keats, Alexander pope

Retrieved from "https://pennyspoetry.fandom.com/wiki/User:Poet_Nithin_Purple?oldid=83682"
Community content is available under CC-BY-SA unless otherwise noted.