Childe was born in Wakefield, West Yorkshire, in 1890, the eldest of 4 sons of Kate (France) and Henry Slade Childe, a mining engineer from Bradford.[1]

He was educated at Harrow School and Magdalen College, Oxford. He edited Oxford Poetry from 1916 to 1920. He became a Roman Catholic convert in 1916.[2]

He is chiefly remembered for Dream English: A fantastical romance (1917) which was and still is something of a minor cult book. He was admired by Arthur Machen and later by poet Robin Skelton.[3]

In 1922 he joined the English School, University of Leeds, where he was a colleague of J.R.R. Tolkien. The 2 men became friends, and Childe was the godfather of Tolkien's son, Christopher.[2]

His Selected Poems were published in 1936. He associated with the Sitwells, but was no modernist; he has been described as "almost too Georgian to be true".[3]

He was a member of the Brontë Society for some years, and in the last few months of his life served on the Council of the Society.[4] 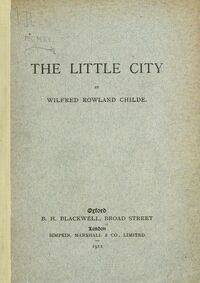 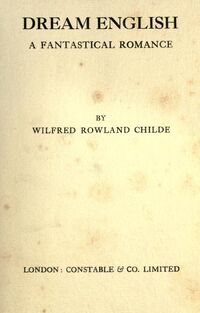 Retrieved from "https://pennyspoetry.fandom.com/wiki/Wilfred_Rowland_Childe?oldid=235010"
Community content is available under CC-BY-SA unless otherwise noted.