Lighthall was born in Hamilton, Canada West (now Ontario), to Margaret Wright (McIntryre) and William Francis Lighthall, and grew up in Montreal.[2]

In 1893 Lighthall did the legal work pro bono to incorporate the Montreal Women's Club.[2]

In 1915 he founded Canada's first veterans' group, the Canadian Association of Returned Soldiers.[2]

Lighthall was a member of the International Congress of Philosophy.[2] He published in the Philosophical Review three times in the late 1920s.[3]

He took a long-time interest in Canadian history, originating the ChÃ¢teau Ramezay Historical Museum, and serving on the Royal Historical Monuments Commission and as chairman of the McCord Historical Museum. He wrote historical books, such as Montreal After 250 Years, and monographs, like The Manor House of Lacolle.[2]

Lighthall also wrote historical romances, initially under the pen name of Wilfrid ChÃ¢teauclair, beginning with The Young Seigneur, or Nation Making in 1888.[1] He wrote poetry as well, publishing his first book, Thoughts, Moods and Ideals, in 1887.[2] He was an early supporter of the Canadian Authors Association, becoming its president in 1930.[1]

In literary circles, though, Lighthall "is remembered mainly for his anthology, Songs of the Great Dominion ... which included a large number of poets whose names are still familiar, for example, Wilfred Campbell, Carman, Crawford, Johnson, Lampman, and Charles G.D. Roberts."[4]

Lighthall was among a number of the post-Darwinian thinkers of the 19th century who struggled with the concept of a Supreme Cause. Some of them not only struggled to redefine "God"; they also struggled to rename this entity. For his part Lighthall defined the cause as a "force of will"and called that force "The Outer Consciousness", "The Outer Knowledge", "The Directive Power", and "The Person of Evolution". However unlike the philosopher Schopenhauer or the novelist Hardy, Lighthall, who considered himself to be both a philosopher and a novelist was optimistic in his view of the nature of "the will". That optimism was based on Lighthall's unbending faith in the positive nature of evolutionary progress. His views are present in his ovels particularly in The Master of Life as well as in his hope for Canada as a nation.

A reader of Lighthall's philosophical works may encounter some difficulty with the style. The main problem lies in the fact that Lighthall seldom completely reworked the lecture notes, pamphlets, and texts that he used to create the works as he published them. Furthermore, he preferred to number his paragraphs, as he considered these paragraphs to be "capsular" ideas. Perhaps due to his training in law he preferred to protect the integrity of these modules rather than sacrifice any of their meaning for the integrated flow of ideas in a particular chapter as a whole. Because of this practice the author's style appears jarringly disjointed at times. Ironically, the logical progression of deductive reasoning, so important to Lighthall's system, is often under stress because of this style.

The Lighthall system was an attempt to remarry science and religion in a single philosophical understanding of reality. Within the structure of that system Lighthall claimed to have avoided what he called the "metaphysical" problem. He insisted that all that was proposed in the hypothesis was derived from his observation of scientific fact. To be precise Lighthall considered the principles of his theory to be "proven" scientific facts and the proof to be founded upon deductive reasoning.

The system equated Instinct with Will. Further it viewed Will as the manifest cause of both the conscious and unconscious act. Lighthall stated: 'All living action is willing, and all is by nature purposive.'

Lighthall informed his readers that it was the phenomenon of the altruistic act that had been the initial "middle" ground that had led him to the formulation of the theory:

The utilitarian school, with its intellectual solutions on the basis of joy and pains, reflected by sympathy, appeared to me to give a reasonable account of most other moral acts, - but that an individual could deliberately annihilate himself for another evidently imported some element extraneous to the individual's own ordinary machinery of willing. Determined to accept no superficial 'explanation' of the problem such as glib use of words like 'volition' and 'conation,' I reduced acts of will to their simplest forms, noting their gradual shadings into, and intimate connections with habits, instincts, functions, reflexes, etc., and observing that these led to a world outside the consciousness of the individual. Thence I was brought to conclude, like Schopenhauer, that there is a unitary directive cause behind all these processes, and I included Evolution itself, regarded as one long act of willing. The characteristics that struck me most forcibly were the independence of this outer will, and its apparently highly conscious nature.'[5] 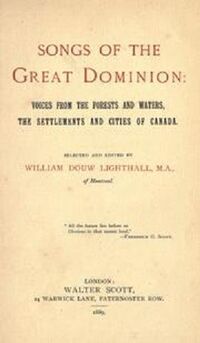 Retrieved from "https://pennyspoetry.fandom.com/wiki/William_Douw_Lighthall?oldid=220677"
Community content is available under CC-BY-SA unless otherwise noted.