Campbell, who published mainly as Wilfred Campbell, is often classed as a member of Canada's Confederation Poets, a group that also included Sir Charles G.D. Roberts, Bliss Carman, Archibald Lampman, and Duncan Campbell Scott; he was a colleague of Lampman and Scott. "By the end of the nineteenth century, he was being hailed as the unofficial poet laureate of Canada." [1]

"Although currently less fashionable than the other Confederation poets," says the Canadian Encyclopedia, "Campbell was a versatile, interesting writer, influenced by Burns, the English Romantics, Poe, Emerson, Longfellow, Carlyle and Tennyson. At his best, Campbell controls his influences and expresses his own religious idealism in traditional forms and genres." [2]

The Dictionary of Canadian Biography (DCB) gives Campbell's birthplace and birthdate as "probably on 15 June 1860 in Newmarket, Upper Canada".[3] The William Wilfred Campbell fonds lists them as "Berlin (Kitchener), Ontario, June 1, 1861." [4] His father, Rev. Thomas Swainston Campbell, was an Anglican clergyman who had been "assigned the task of setting up a succession of frontier parishes in Canada West" (as Ontario was then called), and in consequence the family had moved frequently.[1]

In 1871 the Campbells settled in Wiarton, Ontario, where Wilfred grew up, attending high school in nearby Owen Sound. He later looked back fondly on that time: "As a boy, I always enjoyed the campfires we built in the woods or on the shingly beach of some lone lake shore, when the stars came out and peered down on the windy darkness and swallowed up the sparks and flames from the crackling logs and dry branches we heaped up while the local warmth and radiance added a contrast to the outside vastness of darkness and cold." [1]

He then taught in Wiarton before enrolling in the University of Toronto's University College in 1880, Wycliffe College in 1882, and at the Episcopal Theological School in Cambridge, Massachusetts, in 1883.[3]

He was ordained to the Episcopal priesthood in 1885 and soon appointed to a New England parish. In 1888 he returned to Canada and became rector of St. Stephen, New Brunswick.[4]

After suffering a crisis of faith, Campbell resigned from the ministry and took a civil service position in Ottawa in 1891. He received a permanent position in the Department of Militia and Defence two years later.[3]

Living in Ottawa, Campbell became acquainted with Archibald Lampman (his next door neighbor at one time), and through him with Duncan Campbell Scott. Campbell, Lampman, and Scott co-operated in writing a column of literary essays and criticism, "At the Mermaid Inn," for the Toronto Globe beginning in February 1892. As Lampman wrote to a friend: "Campbell is deplorably poor.... Partly in order to help his pockets a little Mr. Scott and I decided to see if we could get the Toronto "Globe" to give us space for a couple of columns of paragraphs & short articles, at whatever pay we could get for them. They agreed to it; and Campbell, Scott and I have been carrying on the thing for several weeks now." [1]

The column ran only until July 1893. Lampman and Scott "found it difficult to keep a rein on Campbell's frank expression of his heterodox opinions. Readers attacked the Globe after Campbell outlined the history of the cross as a mythic symbol, and his apology for overestimating their intellectual capacities did little to redeem him in the eyes of either the Globe or his fellow contributors to the column." [3]

From August 1903 to June 1905 Campbell wrote a column for the Ottawa Evening Journal. In it, he "worked out ideas influenced by authors such as Richard Maurice Bucke, John Fiske, LeSueur, and Sir Daniel Wilson, as well as Shakespeare, Matthew Arnold, and other literary figures; these ideas would form the foundation of his philosophy for the rest of his life.

Campbell became a strong advocate of British imperialism, for example telling Toronto's Empire Club in 1904 that Canada's only choice lay "between two different imperialisms, that of Britain and that of the Imperial Commonwealth to the south."[5] "Imperialist principles guided his choices for Poems of Loyalty by British and Canadian authors (London, 1913) and for The Oxford book of Canadian verse (Toronto, 1913)."[3]

As editor of the Oxford anthology, Campbell "devoted more pages to his own poetry than that of anyone else, but by choosing mostly from his more ponderous work (including an excerpt from Mordred, one of his verse dramas) he makes a dull showing." In contrast, the poems he selected "from his fellow Confederation Poets represent them by some of their best work."[6]

In 1909, Campbell was transferred to the Dominion Archives.

In 1915 Campbell moved with his family to an old stone farmhouse on the outskirts of Ottawa, which he named "Kilmorie". He died of pneumonia on New Years morning, 1918. He is buried in Ottawa's Beechwood Cemetery.

Campbell's earliest chapbook, Poems, "seems to have been printed at a newspaper office sometime around 1879 or 1880." He placed poetry in the University of Toronto Varsity in 1881.[3]

In 1888 Snowflakes and Sunbeams was printed at Campbell's expense in St. Stephen, New Brunswick. The chapbook "was favourably reviewed in Canada and the United States for its lovely nature lyrics, one of which, 'Indian Summer' (it starts with 'Along the line of smoky hills / The crimson forest stands'), remains among the most beloved of Canadian poems." The entire volume was incorporated into Lake Lyrics, published the following year. "The poems in Lake lyrics and other poems (1889), with their intense rhythms, dramatic imagery, and ardent spirituality, express Campbell's devotion to nature as the revelation of God's presence; this book established his reputation as 'laureate of the lakes.'" [3] Notable new poems in the book included "Vapor and Blue" and "The Winter Lakes"

Campbell's poem "The Mother" was printed in Harper's New Monthly in April 1891; written in the form of a traditional ballad, the poem tells of a dead mother who rises from the grave to claim her still-living baby. It "created a sensation in the literary press and was reprinted in newspapers such as the Week and the Globe in Toronto. In September, the House of Commons (and, in 1892, the Senate) debated whether Campbell should receive a permanent civil service position in recognition of his literary abilities. The proposal was defeated, ostensibly for practical reasons, and the decision established a precedent for withholding patronage from artists. Nevertheless, in 1893 he was quietly given a permanent position in the Department of Militia and Defence, and he would remain a civil servant until his death." [3]

Campbell's third book of poetry, The Dread Voyage Poems (1893), was darker than the earlier two. "In this volume, his poetry began to show the preoccupation with harmonizing religion, science, and social theory that had started while he was still a clergyman and would continue through his middle age." [3] The book contains some of Campbell's best-known poems, such as "How One Winter Came in the Lake Region" and the 'surprise ending' sonnet, "Morning on the Shore."

"In 1895 he published two versified tragedies, Mordred and Hildebrand, and these were included, with two others, Daulac and Morning, in a volume entitled Poetical tragedies (1908)."[7] Also in 1895, Campbell sparked a literary controversy by accusing Bliss Carman of plagiarism, an incident documented in Alexandra Hurst's 1994 book, The War Among the Poets (Canadian Poetry Press).[1]

Campbell published a new book of lyrics, Beyond the Hills of Dream, in 1899. "Included in the book was his jubilee ode 'Victoria,' written for the Queen's diamond jubilee in 1897. Eleven of its other thirty-five poems were reprinted from The Dread Voyage, thus perpetuating the dark tone of the earlier volume. Sombre also was 'Bereavement of the Fields,' one of the better new poems, written in memory of Archibald Lampman, who died on 10 February 1899." [1]

"The early years of the twentieth century saw a prolific outpouring of prose from Campbell. In addition to numerous pamphlets, he wrote five historical novels and three works of non-fiction. Only two of his novels ever appeared in book form: Ian of the Orcades (1906) ... and A Beautiful Rebel (1909). Another novel was never re-printed after its appearance in The Christian Guardian, and two novels still remain only in manuscript form." In addition, he wrote "a book about the Great Lakes (1910, reprinted and enlarged 1914).... The title of the former is quite a mouthful: The Beauty, History, Romance, and Mystery of the Canadian Lake Region. Campbell intersperses these descriptive sketches, which appeared originally in The Westminster magazine, with selections of his lake lyrics to give the reader a very personal tour of the region." Campbell's other non-fiction work, The Scotsman in Canada, also showed personal bias: it "credits Scots with laying the foundation of nearly everything that is admirable in Canada." [1]

In 1914, with war threatening, Campbell published a book of imperialistic verse, Sagas of a Vaster Britain. "Many of its seventy poems were recycled from previous collections, patriotic effusions like 'England' ('Over the freedom and peace of the world/ Is the flag of England flung'") and some of his best work like 'How One Winter Came to the Lake Region.' The new poems, like 'Life's Ocean' and 'The Dream Divine,' have the old weaknesses of displeasing sound ('large-mooned waters') and awkward structure ('"And of all love's far, dim dawnings of hope unborn/ God's latest are best')." [1] "Sagas ... was Campbell's last book, but each New Year's from 1915 to 1918 he distributed pamphlets of poems relating to World War I." [3]

When Campbell died in 1918, his "popularity died with him. Technically, his work is usually conservative, and his ideas have become unfashionable. His poetry has been compared with the more polished works" of the four major Confederation poets. "In fact," though, as the DCB sums up his career, "Campbell worked hard to achieve naturalness, sincerity, and simplicity of expression, rather than polish; he tried to convey universal truths in order to inspire his readers to strive toward their noblest ideals. Within this framework, the artistic merit of many of his poems becomes evident." [3]

Campbell was elected a Fellow of the Royal Society of Canada in 1894.[3] He was declared a Person of National Historic Significance in 1938. 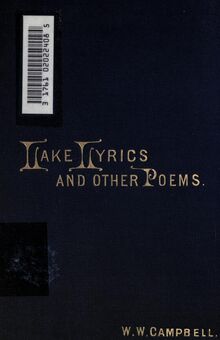 Except where noted, bibliographic information courtesy of Dictionary of Canadian Biography.[3]

Retrieved from "https://pennyspoetry.fandom.com/wiki/William_Wilfred_Campbell?oldid=226089"
Community content is available under CC-BY-SA unless otherwise noted.