Bynner was born in Brooklyn, New York City, and brought up in Brookline, Massachusetts. He graduated from Harvard University in 1902.[1] Initially he pursued a career in journalism, and edited McClure's Magazine.[1] He later turned to writing, living in Cornish, New Hampshire until about 1915.

In 1916 he was one of the perpetrators, with Arthur Davison Ficke, a friend from Harvard, of an elaborate literary hoax. It involved a purported 'Spectrist' school of poets (along the lines of the Imagists) based in Pittsburgh, Pennsylvania. Spectra, a slim collection, was published under the pseudonyms of Anne Knish (Ficke) and Emanuel Morgan (Bynner). Marjorie Allen Seiffert, writing as Elijah Hay, was roped in to bulk out the 'movement'.[2]

Bynner traveled with Ficke and others to Japan, Korea and China in 1917.[3]

In New York, Bynner was a member of The Players club, the Harvard Club, and the Mac Dowell Club. In San Francisco, he joined the Bohemian Club.[1]

Bynner had a short spell in academia in 1918-1919 during World War I, at the University of California, Berkeley as Professor of Oral English. There, he composed Canticle of Praise and taught classes in poetry and verse writing.[1] He was forced to leave after serving alcohol to freshmen during Prohibition.[4]

He then traveled to China, and studied Chinese literature. He subsequently produced many translations from Chinese. His verse showed both Japanese and Chinese influences, but the latter were major. Bynner became more of a modernist in consequence, where previously he had been inclined to parody Imagism, and dismiss the orientalist pronouncements with which Ezra Pound was free.

Life and career in Sante FeEdit

On January 18, 1965, Bynner had a severe stroke. He never recovered, and required constant care until he died on June 1, 1968. His papers are archived in the New Mexico State University Library.

The Witter Bynner Prize for Poetry was awarded by the American Academy of Arts and Letters from 1980 through 2002.[8] 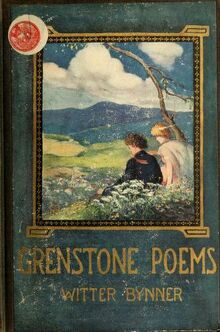 Retrieved from "https://pennyspoetry.fandom.com/wiki/Witter_Bynner?oldid=147281"
Community content is available under CC-BY-SA unless otherwise noted.