Winters was born in Chicago, Illinois, the son of Faith and Harry Winters. He grew up in Eagle Rock (near Pasadena), California.[1]

In 1917-1918 he attended the University of Chicago, where he was a member of the Poetry Club, which also included Glenway Wescott, Elizabeth Madox Roberts, Monroe Wheeler, and his future wife Janet Lewis.[1]

Winters was diagnosed with tuberculosisin the fall of 1918. He moved to Santa Fe, New Mexico, where he recuperated in a sanatorium and wrote his early poems, which were published in 1921 and 1922. Leaving the sanatorium in 1921, he taught school for 2 years in Madrid and Los Cerilos, New Mexico.[1]

From 1925 to 1927 Winters was a language instructor at the University of Idaho. He married poet Janet Lewis on June 22, 1926; the couple would have 2 children, Joanna and David.[1]

Winters enrolled at Stanford University in 1927,[1] and began teaching in its English department the following year. He earned a Ph.D. from Stanford in 1934.[2]

In his criticism Winters championed the idea that a work of art should be 'an act of moral judgement', and attacked such literary icons as Henry James and T.S. Eliot. Despite once being denounced by Stanford's English department head as "a disgrace to the department," he remained at Stanford until 2 years before his death.[2]

Winters's early poetry, which appeared in small avant-garde magazines alongside work by writers like James Joyce and Gertrude Stein, was written in the modernist idiom, and was heavily influenced both by Native American poetry and by Imagism. His essay, The Testament of a Stone, gives an account of his poetics during this early period.

Around 1930, he turned away from modernism and developed an Augustan style of writing, notable for its clarity of statement and its formality of rhyme and rhythm.

Winters's critical style was comparable to that of F.R. Leavis, and like Leavis he created a school of students (of mixed loyalty). His affiliations and proposed literary canon, however, were quite different: Edith Wharton's Age of Innocence above any single novel by Henry James, Robert Bridges above T.S. Eliot, Charles Churchill above Alexander Pope, Fulke Greville and George Gascoigne above Sidney and Spenser.

He attacked Romanticism, particularly in American manifestations, and set about Emerson's reputation as that of a sacred cow.(Citation needed) (Ironically, his earliest book of poems, Diadems and Fagots, takes its title from an Emerson poem.) In this he was probably influenced by Irving Babbitt. He gave the sobriquet "the cool master" to American poet Wallace Stevens.

Winters was sometimes, questionably, associated with the New Criticism, largely because John Crowe Ransom devoted a chapter to him in his book by the same name.

Winters is known for his argument attacking the "fallacy of imitative form:" "To say that a poet is justified in employing a disintegrating form in order to express a feeling of disintegration, is merely a sophistical justification for bad poetry, akin to the Whitmanian notion that a writer must employ loose and sprawling poetry to 'express' the loose and sprawling American continent. In fact, all feeling, if oneself (that is, one's form) is given up to it, is a way of disintegration; poetic form is by definition a means to arrest the disintegration and order the feeling; and in so far as any poetry tends toward the formless, it fails to be expressive of anything."[3]

Winters was awarded the 1961 Bollingen Prize for Poetry for his Collected Poems. 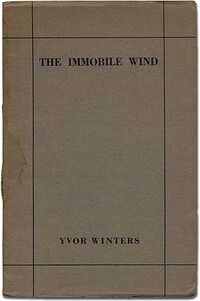 Retrieved from "https://pennyspoetry.fandom.com/wiki/Yvor_Winters?oldid=226169"
Community content is available under CC-BY-SA unless otherwise noted.